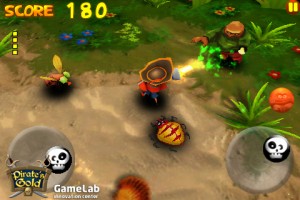 Pirate’s Treasure is a game similar to Minigore [$.99] with two on-screen joysticks to control the game. The right controls where you shoot and the left handles your movement. Unlike Minigore, however, Pirate’s Treasure has a campaign mode that sends you on a quest to recover your gold. The game has over 50 stages, each with different missions to unlock the next.

In campaign mode, you must defeat each stage by completing a certain goal to receive a key to unlock the next level. For example, staying alive for 40 seconds or killing 20 monsters will unlock the next stage. These missions get progressively harder as you get farther in the game. As you collect more keys, you are able to access different areas of the island and play in different themed environments.

You also get gold coins from beating stages that you can use at the shop to upgrade your character. By purchasing upgrades you are able to do better as the levels get harder, advancing you through the game. You can upgrade attributes such as your fire rate, movement speed, chance of getting a flame thrower, and increasing your special ability.

There is also an endless survival stage to see how long you can last and compete on the online leader boards. Be sure to upgrade your character before entering this stage though, as the enemies are much tougher. It’s better to play through the campaign some before trying to compete in this stage. Chillingo’s Crystal social gaming network is used in Pirate’s Treasure to track your high scores in survival mode and award achievements for tasks completed throughout the game.

The campaign mode certainly sets this game apart from most other dual-stick shooters, which tend to be just endless survival games. Upgrading your character along the way and having different missions for each stage makes Pirate’s Treasure a fun and intriguing game that is said to have over 6 hours of gameplay. If you were a fan of Minigore or Guerilla Bob, you should definitely check out Pirate’s Treasure. The game is being extensively discussed in our forums with some people having crashing issues.