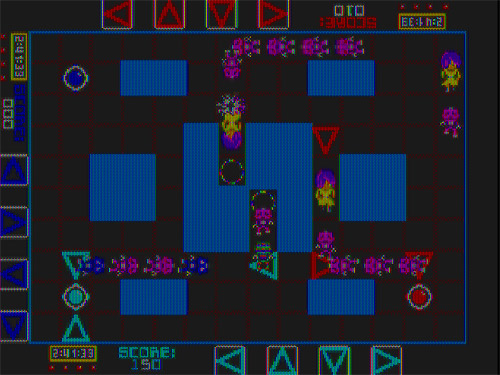 Gurlz VS Robots [App Store] from Sticks+Stones Games is an action maze game for the iPad that caught my attention for two reasons. First, its display is retroexquisitely rendered in such a way as to make the blocky, Robotron-like graphics appear to be actually glowing from the convex surface of an oldschool CRT display. To retro fans like me, it’s a thing of beauty, impressively done. The second and more important reason the game caught my eye is that it takes advantage of the iPad’s large screen to bring a new sort of tabletop, multiplayer game experience to the App Store. It’s a two-to-four player affair that can handle a whopping total of 11 touch inputs at the same time, the limit of the iPad’s multitouch interface. (It’s the first game that’s hit this limit, as far as we are aware.)

The game presents several streams of robots filing onto the play area (there are a number of screen configurations to choose from). Each player has their own set of directional tiles that, when dragged into the play area, alter the direction of the marching robots. But, mixed in among the robots, are a number of vengeful “gurlz." The goal of the game is to strategically (and rapidly) place your directional tiles in order to direct as many robots as possible to your own, color-coded escape pod before your time runs out, all the while directing the evil gurlz away from both your robots and escape pod to avoid their attacks. Getting all of this done — and fast — with up to four sets of hands groping your iPad at the same time makes for some pretty chaotic (in the best way) action.

A gameplay video posted by the developer demonstrates the action of four players enjoying the game at a party (though, readers sensitive to a bit of “colorful language" might want to pass). 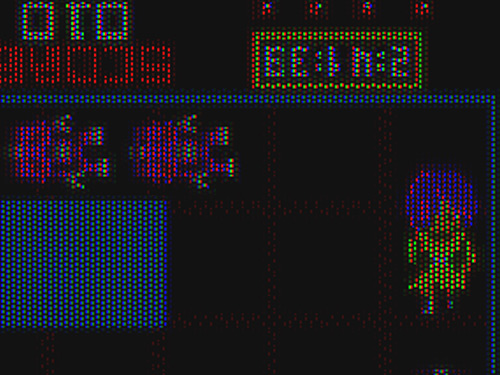 Gurlz VS Robots would be a great game to break out at a gathering, with frantic, group gameplay that would seem to best the popular Wii party game experience, given the hands-on nature of the iPad’s screen. My only gripe with the title is its lack of a one-player mode set against a computer AI opponent. I hope that will come but, really, my wish item stands outside of the author’s real goal of this title, which was to deliver a fun, new social gaming experience. And, with Gurlz VS Robots, that goal has been well achieved.