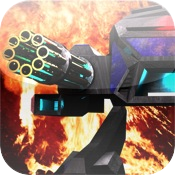 It was little more than a week ago that we were lamenting that Starcraft 2 would not be coming to the AppStore any time soon. Unbeknownst to us, indie developer Pixel Stream has been working on the silver lining to that news for almost 8 months, with the release of their Starcraft-esque real-time strategy game, Armada – Galactic War [AppStore].

Firstly, let’s dispense with one important fact early– Armada is a no-nonsense, online-only RTS, at least until a promised future update releases offline play too. This means from your very first game you’ll be facing real competitors over your WiFi or 3G networks and won’t be charging through a pre-scripted, story-based set of missions. Fortunately, you aren’t thrown entirely in the deep end, as a brief page-by-page tutorial offers an introduction to the game’s mechanics and features. 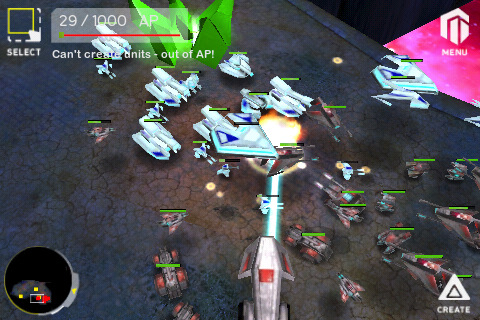 Each Armada army, of which there are 3 — the Humans, Cyborgs and Aliens — has 4 distinct classes of units. There are no buildings to concern yourself with, so the scope of your campaign is entirely in considering whether to deploy your Mechs, Tanks, (flying) Ships or your solitary Mothership. Unit effectiveness is determined by a loose rock, paper, scissors formula, where Mechs are effective against Ships, Ships are best against Tanks (who are the only units that can’t attack air units) and Tanks use their splash damage to chew through Mechs. Each unit class (with the exception of the Mothership) is further broken down into 3 units of increasing strength and cost. The Mothership is the hub of each team, a goliath of a ship that is both your source of units and a competent fighter against all the other classes. Its destruction serves as the overall objective to achieve victory in Armada.

Your entire army is funded by sending your Mechs to harvest the green crystals scattered across the map (sounds familiar?). Selecting units and ordering them to a task is ingeniously simple in Armada. You enter select mode by holding one finger on the yellow square at the top left of the screen and can either drag a box around your units, or tap them individually to select them. Releasing the select box allows you to then issue commands by tapping on-screen, such as sending Mech units to mine crystal. 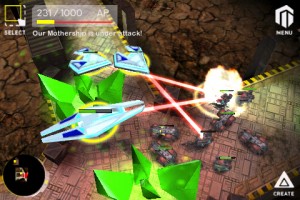 It’s a wonder that many developers have cited difficulty in translating traditional mouse controls to the touch interface as the major reason RTS games aren’t featuring on the AppStore (just read the comments from Blizzard above). Pixel Stream have managed to come up with a control scheme that feels both intuitive and responsive and allows for a surprising amount of micromanagement too. That’s not to say we were completely satisfied with the control options, as we would have liked to see a way of de-selecting units and assigning control groups (to on-screen buttons perhaps?) or selecting all units of the same type to better co-ordinate your army in combat, but the basis for a successful system is certainly in place. A few tweaks could make it really exceptional.

We were very impressed by the online service provided via Pixel Stream’s Zing Network. Private matches were simple to setup and the matchup system found opponents nearly instantly, or would revert to an AI player if players weren’t available. Games played on WiFi naturally ran very smoothly but we were surprised to find that 3G connections were just as capable. Armada’s netcode and graphics performance also appeared to be in peak form, as we piled scores of units on screen at once, upwards of 30 or 40, and noticed no perceivable performance hit on our 3GS device. Our 2G Touch device skipped only a few frames too, but combat certainly remained playable. 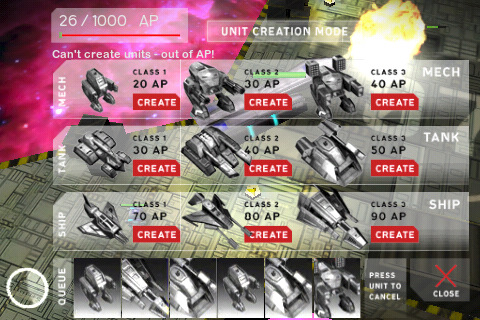 The 5 maps initially available in Armada can be played in any configuration from 2-4 players, with 4 player battles being a (manic) highlight in our time with the game. The maps all have different configurations and slightly different themes, though their function is more strategic than aesthetic, as each has a number of crystal farms for you to expand to in order to gain a leg up on opponents. The units themselves are crafted in simple 3D; they are evidently low-poly with low resolution textures. That’s not to say they don’t look nice though, as they are all easily recognised on the battlefield and get the job done. Each race has a completely unique style individual to their personalities too (for example, the Cyborgs are clean-lined and shiny, whilst the Humans are more rugged looking).

Armada also features an underlying upgrade system called A.R.M.S in-game, which we are admittedly on the fence about. 10 customizable upgrades (in total) can be applied to your profile, each one boosting the abilities of 1 particular unit in your arsenal. For example, a Mech 1 speed upgrade will boost the movement speed of any 1st tier Mech that you create by 30%. There are hundreds of upgrades to choose from covering the whole gamut of attributes for each unit (and the mothership too). Upgrades are purchased by credits which are awarded for playing matches, with wins and larger scale matches equating to larger returns.

The A.R.M.S system was intended to offer an additional layer of strategy, but it ends up playing out more like a ranking system on FPS games, where players that stick with the game have a significant advantage over those who play infrequently. To give an example, one player on our forums, backtothis— who is currently on top of the leaderboards– claims to have upgraded his level 1 Mechs to the point where they can destroy level 3 Tanks. This costs an exorbitant amount of credits to do however and won’t be an option available to the average player for quite some time. We sincerely hope the developers will keep an eye on this, as the upgrade system could be a major source of serious imbalance issues in future match-ups, something that is far more detrimental to RTS’ than other genres.

Armada makes serious inroads into capturing the essence of popular real time strategy games on a portable device. It is clearly influenced by the greats such as Starcraft, and in some ways actually manages to distil the epic unit-to-unit match-ups and combat strategy that made that game a hit. Its focus on unit management over building management ensures a narrower scope of battle that is well suited to shorter, more intense matches. It already has a tight control setup in place (which could still use some tweaking) and a match-up system that works– and works well. Our major concern is with the potential abuse of the upgrade system, the effect of which largely remains to be seen, and whether the developers can keep up with the inevitable balancing updates required.

At this stage though, we’re ultimately impressed by what 3-man developer Pixel Stream have done; they have catered for RTS fans in a way that other larger developers had thought too difficult. With the promise of offline play in the near future, Armada is an effortless recommendation to any RTS buff looking to test their APM on the touch devices in a competitive environment. To check out the gameplay for yourself, take a peek at the developer’s trailer above or hit up our forums for other readers’ impressions.