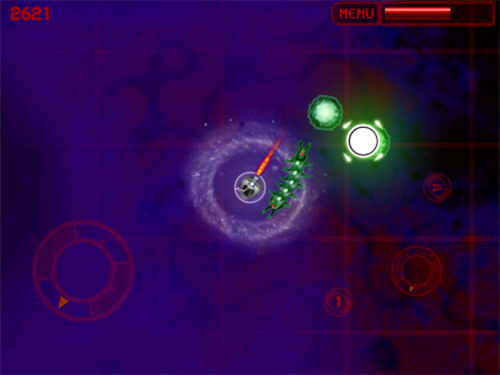 Nearly a year ago I took a look at PDJ Apps’ iPhone homage to Inner Space (ok, that’s a joke) Nano Fighter [App Store] and found it to be a decent dual-stick shooter in the vein of Robotron and Geometry Wars. It’s not the best or most feature-packed shooter I’ve encountered, but it makes for a fun few minutes of shooter action on the go. Pavel Doichev has recently released Nano Fighter for iPad [App Store]. And it can be described in pretty much the same terms as the iPhone original.

In Nano Fighter for iPad, as with the iPhone original, you take the helm of a microscopic vessel working your way through a host organism, battling various immune systems and bacterial baddies. It’s a level to level progression, and each level is only one minute long, so the difficulty ramps up pretty quickly. It’s a decent shooter that delivers real intensity

I was somewhat disappointed to see that the iPad version, although designed for the device’s larger, high res screen, features sprites that appear to be simply up-scaled renditions of those from the iPhone version. As well, there’s something about the controls of the iPad version that come up short as compared to the iPhone original — it’s hard to articulate. Nano Fighter, for these reasons, actually feels a better fit for the iPhone than for it’s new, larger sibling.

All that said, right now Nano Fighter for iPad is going for $.99, a half-price introductory sale that should last a few days more. My advice is to grab it now if you’re a fan of the iPhone version and are looking for some shooter fun on your new iPad. When it jumps up to $1.99, we might recommend that iPad users just grab the $.99 iPhone original to run at 2x scaled. It’s fun to play on both platforms, but I’d hoped for a little bit more from an iPad rework.