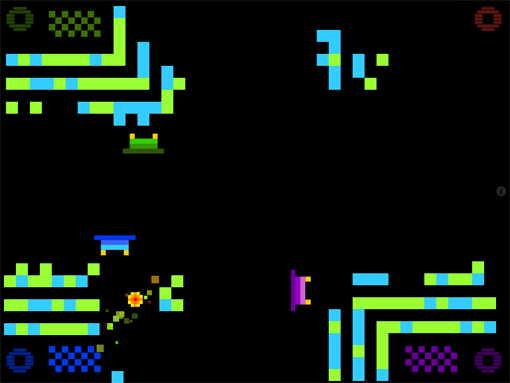 Castle Bash is a remake of Atari’s 1980 arcade release Warlords, which is probably best known for its release on the Atari 2600 console in 1981. Rated the 25th greatest video game of all time by Game Informer, Warlords allows up to four players to compete in a castle defense bout that’s something of a combination of Breakout and Elimination / Quadrapong.

Warlords presents a game screen consisting four castles, one in each corner, each of which must be defended by a movable shield that can slide along the castle walls. The shield is used to deflect a fireball that bounces about the play area, knocking out bricks on impact with a castle wall. If a wall is breached and the fireball knocks out the king inside, that player gets zero points for the round, while the last player standing gets one point. The game allows for one to four human players to get in on the action.

Castle Bash is a very close rendition of the Warlords formula. The only real difference is the apparent lack of the ability to capture the fireball with your shield and send it off in the direction of your choice, as you can in the original — deflection is the only interaction you have with the fireball. The game allows either one or four human players to man each castle, the latter scenario making great use of the iPad’s large screen for tabletop group gaming. There is an Arcade mode which is just one round of quick play, as well as a Tournament mode that brings round after round of play. The game’s visuals are straight up retro, with blocky, glowing pixels that, along with the simple, “blippy" sound effects, will take anyone familiar with the Atari classic right back to the early ’80s.

Castle Bash, like Warlords before it, is a rather simple game by today’s standards — we’re talking 30 year-old gameplay, after all. But it is entertaining. In fact, Warlords was recently released on the Xbox Live Arcade. The only real complaint I have with the title is the need to trace a finger along the line of the castle walls to move your shield. The arcade and 2600 releases used spinners / paddles, which would’ve been better approximated with a simple, linear touch slider. It’s definitely more of a preference than a deal-breaker, though.