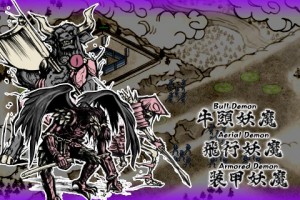 In today’s crowded App Store, it really takes a lot as a tower defense game to stand out from the rest of the pack. Unsurprisingly, Taito, a developer with amazing roots in retro gaming and a fantastic catalog of iPhone games, have managed to cram the required tower defense magic in to Mikado Defenders [App Store] to make the game still worth a look even if you’ve already got an iPhone full of tower defenders.

Similar to InMotion Software’s Dungeon Defense [99¢ / Free], units are built on pre-positioned areas along the path that the enemies travel down. You can build and upgrade a number of different ranged and melee units on each of these locations on the map. Much like Dungeon Defense, it seems that the best strategy involves positioning melee units to hold the line in front while your ranged units pelt the bad guys from afar. 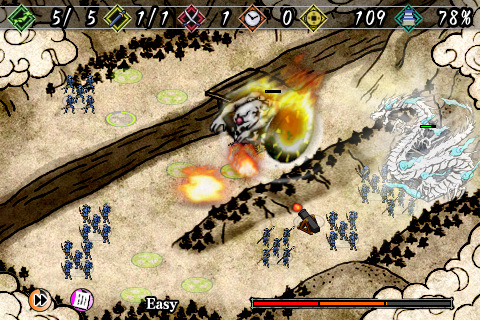 Additional depth is added to the game with the ability to upgrade various components of your castle’s defenses along with customizing which guardian spirit and commander you use. Guardian spirits unleash special powers such as clearing most of the units on screen, briefly making your units invulnerable, and other effects once you’ve killed enough enemies to fill a spirit gauge on screen. New commanders are unlocked as you play through the game, and each offer individual bonuses to your units.

All of this is wrapped in a really slick looking Japanese art style that adds a ton of atmosphere to the game. The actual unit animations are a little lackluster, but considering the sheer amount of units that can be on screen fighting at once I suspect that not having extremely fluid battle animations was a performance trade off. All of this can be seen in the following gameplay trailer:

The tower defense section of the App Store is arguably just as crowded as the match three and line drawing sections, but Taito has managed to create a really cool looking game with a decent amount of depth to it that should make any fan of the genre happy. It comes with multiple difficulty modes, as well as both a story and endless mode. Impressions in the thread in our forums have been positive so far, and much like Taito’s other iPhone games, Mikado Defenders is a lot of fun.