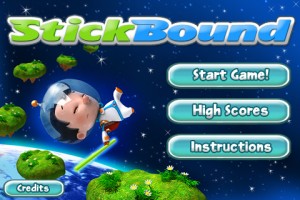 Stickbound is a recently released take on platforming that uses a new type of mechanic to advance your character through the game. Imagine an upside down Hook Champ crossed with pole vaulting, and add a dash of pogo-sticking, and that gives you a rough idea of this game. It’s clever and hasn’t been done before, and provides a fun and compelling experience.

The gameplay involves propelling a tiny spaceman across hot dogs, plungers, piñatas, and other weird objects. Touching anywhere below your character extends a pole that launches him into the air. Where you touch the screen in relation to your character determines the trajectory. Touching right below him sends you straight in the air, and touching off to the side a bit sends him flying diagonally. The longer you touch, the more the pole extends, allowing you to control the force of your jumps. It takes some serious practice before the concept finally clicks, but once it does you’ll be deftly bouncing along your merry way. 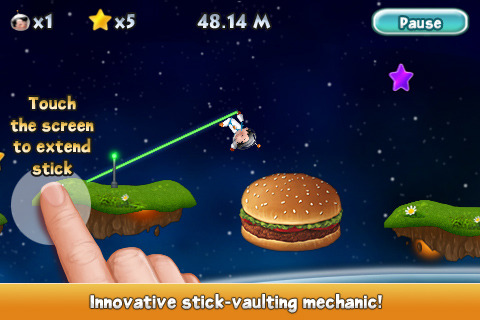 While this unique gameplay is really enjoyable, Stickbound does end up feeling a little shallow. The main draw is an endless mode, that has you seeing how far you can advance in the randomly generated terrain within your allotment of lives. There’s the ability to earn more lives by collecting 50 of the stars spread around the level, and checkpoints in short intervals so if you fall into oblivion you can pick up near where you fell. A couple different power ups can float by occasionally. One rockets you a short distance and lands you safely and one that gives you wings that flap with taps of the screen. There is also a Timed mode that is exactly the same thing only you see how far you can get in 30 seconds. Both modes have separate online scoreboards you can submit to. Finally, three more characters can be unlocked by meeting certain criteria in the game.

Stickbound is a lot of fun to play. It has colorful graphics, really charming music, and a gameplay hook that had me obsessively trying over and over to top my best scores. At the same time, I’d love to see this new mechanic put to use with set level designs and much more content, similarly to something like the aforementioned Hook Champ. Still, at the introductory price of only 99¢ Stickbound is definitely worth taking a look at.