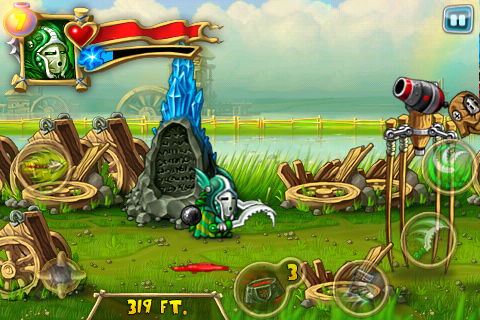 Six months ago MoreGames/Chillingo released a free game called a Quest of Knights Onrush [Free] to promote their castle defense game Knights Onrush [0.99]. What they didn’t expect was that this free promotional game would turn out to be a big hit. The game made it into the Top 10 list in several countries and generated over 2 million downloads. Given that strong response, they quickly decided to begin work on a premium version called Knights Rush.

The gameplay of Knights Rush will be similar to the first game, but instead of just being an endless survival game, there will be a complete campaign to play through. The campaign will feature 8 worlds to explore each with different locations, bosses, and enemies. There will also be 3 different heroes each with different skills and abilities. The more I hear about this game, the more it reminds me of Castle Crashers on the Xbox, which is not a bad thing.

At this time there are no details on the release date, price, or target devices. Keep an eye on the thread in our forums for more details and screenshots as they become available. We will let you know as soon as we find out more.