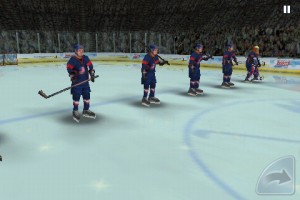 While practically every other sport you can think of has graced our touch screens, I find it shocking that there hasn’t been one legitimate option for the sport of ice hockey. This all changed last night as Hockey Nations 2010 was released. It boasts 3D graphics and simple gameplay with a fun arcadey feel, but misses the mark in a few key areas and falls just short of being the iPhone’s first great hockey game.

Hockey Nations offers two different style tournaments as its main mode. Battle against other nations for a gold medal or international bragging rights. The players are 3D models that look slightly ugly and blocky up close, but look nice during the actual game when the camera is zoomed out. The animations in the game are fantastic, fluid and realistic, and are the high point of the visuals. There’s only one arena, and it’s graphically passable, but nothing memorable. The only music in the game is some slightly cheesy guitar rock during the menus, and there’s barely any noise while playing in a game. Modest crowd murmurs and soft skating sounds are all you will hear, besides the occasional horn and cheers from the stands after a goal. 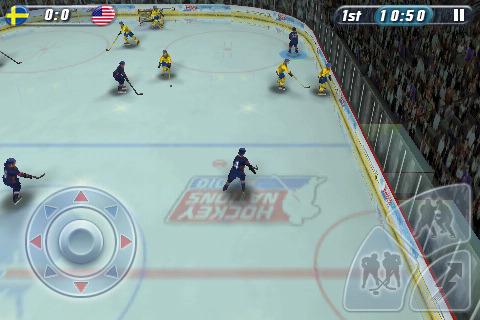 The game is controlled with just a virtual stick and three buttons. It’s not overly complex, but there are a few advanced moves you can perform that are explained in the tutorial. It’s a good pick-up-and-play game of hockey, but a couple of glaring issues can replace your fun with frustration. First, the AI is a mixed bag. The opposing team’s players seem faster than yours, and are also able to make pinpoint shots and passes with ease. In contrast, the goalie AI for both teams is borderline brain dead. You’ll get scored on, only to watch the goalie finally slide into blocking position as the opposing players’ arms are raised in celebration. The second issue with gameplay is that puck possession changes far too easily. Most of your time is spent stealing pucks back and forth from each other, and your passes rarely go where intended. It’s hard to stay in your offensive zone long enough to get off many quality shots. It can still an enjoyable game to play, but would be much more so if these areas were improved.

In addition to the tournaments, you can practice, play a quick exhibition game, or compete in a shootout. The shootout mode is actually a fairly entertaining mini game, and has each team exchanging one on one shots with the goalkeeper for best out of three.

There are the foundations of a really great game of ice hockey here. The graphics and controls get the job done nicely, but AI issues and some imbalanced gameplay get in the way of true enjoyment. The developer Distinctive Games has stated they are looking into fixing the problems with the game, as well as adding features like line changes, multiplayer, custom teams and fighting. Hopefully updates can improve Hockey Nations 2010 so it can earn its spot as the premier iPhone ice hockey game, without defaulting to that title by virtue of being the only one currently available.