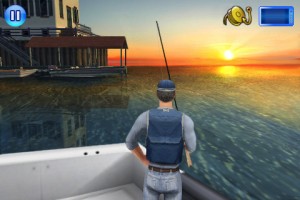 Last night Gameloft released their latest game Fishing Kings. We had previewed the game during GDC in March. Fishing Kings uses some proven gameplay mechanics like those found in Flick Fishing, but adds some nice new features and top notch graphics.

When you start the game you are shown an overhead map displaying North and South America. From here there’s five different locations you can choose to fish in, with four of them unlocked from the start. The locations include the Bahamas, Lake Erie, New Zealand’s longest river the Waikato, Nahuel Huapi lake in Argentina, and finally the Amazon River, which is the one locked location. Each of these fishing areas breaks down into three smaller sub-areas. There’s a nice mixture of places to fish, some of which are quite exotic.

Also displayed on the world map are four buttons that include the necessary tools you’d expect from a fishing game. “Tackle" lets you change lures, rods, lines and reels. All of this equipment can be upgraded with the money you earn to assist in reeling in the tougher fish later in the game. “Diary" keeps track of a few different career stats, as well as Gameloft Live achievements and leaderboards. The “Guide" option displays a picture of all the fish you’ve encountered along with their preferred lure, and finally a “PDA" option let’s you know about tournaments and other missions. 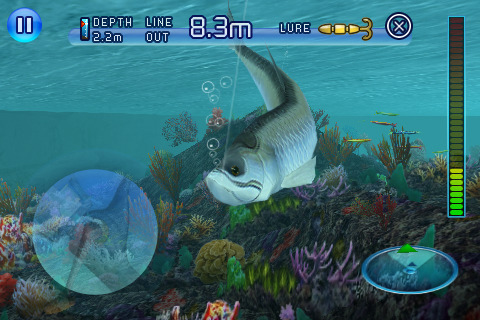 The actual fishing mechanics are very similar to Flick Fishing, except everything is in landscape mode. You’ll flick your device forward to cast your line, jerk it upwards to set the hook in the fish’s mouth, and finally spin a small touch reel to draw the line in.

Where Fishing Kings differentiates itself is in requiring you to tilt your device with the hooked fish’s movements so as not to cause too much tension and snap the line. This really adds to the realism and fun of catching fish as you grip your device tightly and swing your arms to and fro trying desperately to not let that sucker break your line. At the same time this makes it much more difficult to catch fish than in Flick Fishing, but far more satisfying. You get the hang of it with practice, and the various upgrades you can buy help make the process easier.

So far Fishing Kings seems to be solid take on iPhone fishing. The fishing works as expected, and is decidedly more fun and interactive than other available titles. As with most Gameloft games, the graphics are quite good and the underwater camera element adds a nice touch. There’s also plenty of upgradeable gear and fishing venues to work your way through, as well as tournaments to enter and achievements to unlock. Finally, other early impressions in our forums have also been quite positive.