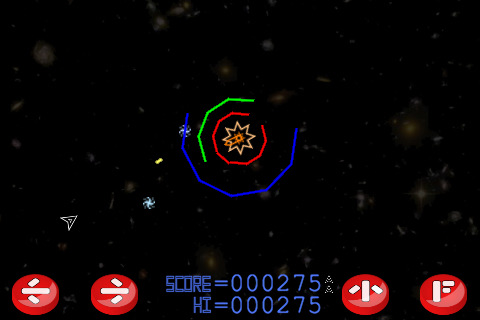 Earlier this month mobile developer AdAdo released a retro space shooter that’s pretty sparse on eye-candy, but should have definite appeal to oldschool gamers who have fond, long-ago memories of feeding quarters into a certain video game known as Star Castle. Star Keep for the iPhone [App Store] is pretty much a straight-up clone of Cinematronics’ 1980, vector-based classic. 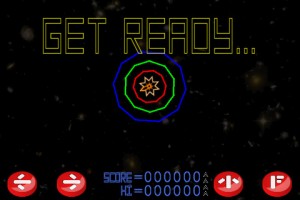 Like Star Castle, Star Keep challenges you to use your laser-equipped spaceship to obliterate a powerful enemy turret that lies at the center of a series of rotating, regenerating shield rings. In order to destroy the turret, you must eliminate outer shield segments, exposing segments within, and so on, until you’ve laid the turret bare and can get off a clean shot. But be warned, the turret is always tracking you and firing homing bolts that chase your ship. As the levels progress, other enemy craft emerge from the shields, bent on turning you to space dust.

The game is controlled via on-screen buttons: Left / Right, Fire, Thrust. The controls work well enough, but even the arcade cabinet, which utilized botton Left / Right controls, would’ve benefitted from a rotary knob. The trick is to keep moving and to think ahead, so as not to let your momentum get away from you.

For Star Castle fans, this is probably a no-brainer grab. For those unfamiliar, be aware that Star Keep delivers very basic gameplay by modern standards. If you can enjoy basic (and challenging) arcade action without a lot of flare, then maybe you, too, will find fancy with this simple (but sometimes mind-bending) formula.