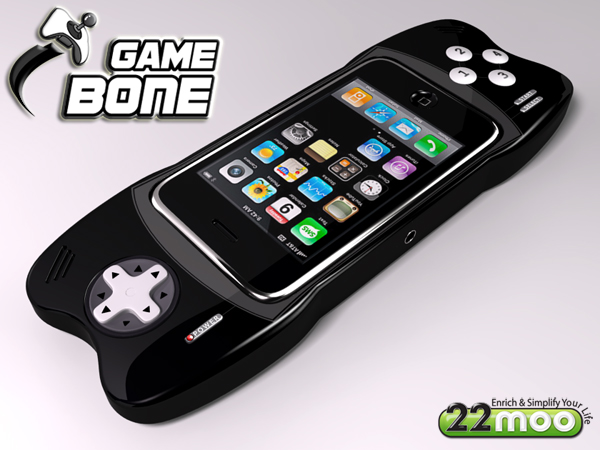 There’s been a lot of talk about the possibility of some sort of physical game controller for the iPhone and iPod Touch. While there have been a few announcements, none of the projects have ever come to market. We never heard for certain, though we’d heard suggestions that Apple might not have previously been allowing official SDK-supported versions to be approved.

22moo seems confident that they will get approved and recently released a new rendering of their planned game controlled hardware add-on. The redesigned device is said to include stereo speakers, omni direction mic, built in lithium battery, and 30-pin connector. More exciting is a note from Manomio’s Stuart Carnie that they are working with 22moo to support the Gamebone in their C64 emulator in the App Store — and according to Carnie this will be an official solution that does not require jailbreaking.

There is some ongoing debate about the point of such controllers for native iPhone games. Why do you want to carry an extra accessory around with you? But I think emulators are a clear use example as people do want to relive their emulated games without working with touch-screen controls,