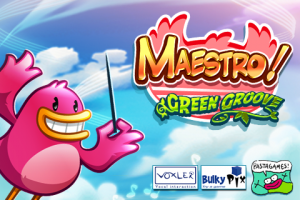 There are a lot of crazy rhythm games on the App Store, including the recently released Thumpies, but Bulkypix’s Maestro Green Groove takes the cake in being the most insane musical game I’ve played so far on my iPhone.

Maestro Green Groove is a crazy combination of a beat matching and platforming. You control a pink duck who struts along the level, and by swiping up or down you pluck the rope he’s running across to make him either jump or fall down. Fruit are scattered throughout the level, and each fruit you pick up plays a musical note. Also, there are special strings that glow which must be strummed by swiping across them just as the glow is completely fading. To make things even more complicated, various monsters pop up which must be tapped to eliminate at the same time the circle that appears comes in to contact with them. 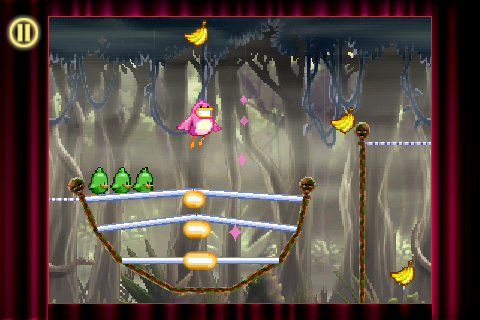 If you manage to do all these things at the right time, you’ll actually be playing a piece of classical music. The way it all flows together is nuts, and there is so much going on at once that you’re frantically swiping your finger and tapping that the first few times you go through a song there’s little you can do to not end up failing and having to do it over again. After a little practice, you’re bombing through levels watching your smug smiling duck parade around as you bust out Beethoven’s 5th. It’s awesome.

Here’s a video of me doing poorly:

According to Bulkypix, Maestro Green Groove is “nearly ready" to be launched on the App Store, and when it finally appears for download it will be priced at 99¢.