If it weren’t obvious by now, ngmoco has completely shifted gears from their former business model of offering “premium" priced games to free to play “freemium" games. Eliminate [Free] and Touch Pets Dogs [Free] were just the start of the pricing trend that will likely permeate the rest of the ngmoco game lineup for the foreseeable future.

A number of things can be attributed to this shift, in a Gamasutra interview with ngmoco VP Alan Yu, he cited 50% to 90% piracy rates, and discussed the increasing difficulty in selling iPhone games at a $9.99 price point as the market drives itself to rock-bottom 99¢ pricing. Free games can’t be pirated, and the explosion of Facebook gaming, as well as the success of the various Epic Wars and other similar games on the App Store solidified the validity of the free to play model before Eliminate even launched. 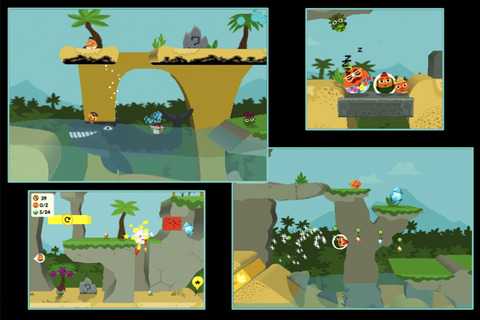 The unfortunate side effect of all this is that Rolando 3 as it originally was envisioned is left as the odd man out, per an IGN interview with Neil Young, founder and CEO of ngmoco. Since ngmoco currently has no plans to release games that aren’t free, the Rolando franchise has been sent back to the drawing board until they can figure out a sensible way to deliver a Rolando game as a free to play experience.

Even though there may not be a Rolando 3 anytime soon, I still recommend trying out the existing Rolando games on the App Store if you haven’t already. The original Rolando [$2.99 / Free] as well as Rolando 2 [$4.99 / Free] are both absolutely fantastic games, making excellent use of both the touch and tilt controls of the iPhone.