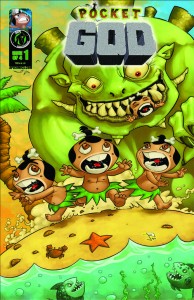 Kotaku got the scoop this afternoon on a surprising development in the Pocket God [App Store] universe: A comic book series is coming.

The Pocket God comic is a collaboration between Bolt Creative and indie comic company Ape Entertainment and will initially be released as a digital four issue mini-series with print issues and a trade paperback coming later. Both companies are excited at the prospect of the comic book, as Bolt Creative is bringing an army of over 2 million fans to the table, while Ape Entertainment and publisher iVerse Media could potentially expose tons more people to the pygmies of Pocket God that may not be iPhone gamers.

Pocket God has been an amazing success since its release nearly a year ago. Initially, there was so little to do in Pocket God that we were reluctant to cover it, or even label it a “game". 30 episodes later and the amount of interaction players now have with the pygmies is amazing, with multiple islands, environmental objects to interact with, mini games and even an in-game store that offers customization such as theme packs and even additional pygmy dances.

All that’s left now is to see how they work the “You KNOW You Like Pocket God" catch phrase in to the comic books, and what kind of story they can spin in a comic based on a game with no plot to speak of. For more information, check out the interview with developer Dave Castelnuovo of Bolt Creative and David Hedgecock of Ape Entertainment on Comic Book Resources.