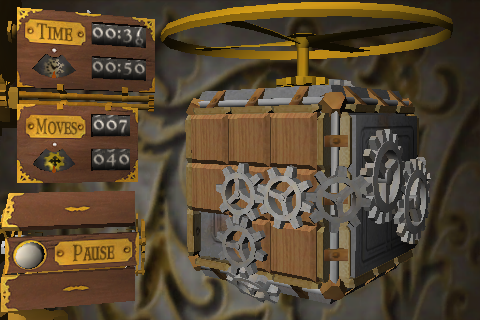 Lazy 8 Studios (through Chillingo) has just released an iPhone version of their 3D mechanical puzzle game Cogs [App Store]. The iPhone release is an adaptation of their PC original, which is currently a finalist in the IGF 2010 Excellence in Design category.

Cogs is a mechanical puzzler that challenges you to bring to life a series of increasingly complex machines by way of arranging sets of tiles, gears, pipes, and the like in such a way as to connect varying energy sources to their ultimate outlets across 50 different 2.5D and 3D environments. And the whole thing is done up in a lovely steampunk motif (the best cogs are, of course, brass). There are carts to set rolling, balloons to inflate, helicopters to build, and rockets to launch. The sliding tile mechanic makes it feel something like Puzzle on (brass and mahogany) steroids. 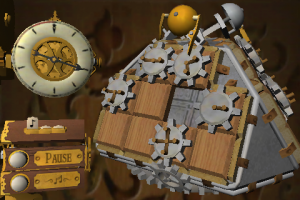 Cogs presents you with three different modes of play. Inventor Mode, which is really the core gameplay mode, takes the player through all of the game’s 50 puzzles, starting with the easy and moving towards the maniacal. The other two modes are Challenge modes that provide access to any puzzles unlocked in the Inventor Mode and are great for getting off a quick round or two on the go. Time Challenge presents any unlocked puzzle in an easier-to-solve configuration than Inventor mode…but each puzzle must be completed within 30 seconds. Move Challenge mode, in contrast, is all about taking time to decide the most efficient route to a puzzle’s solution — each puzzle must be solved in 10 moves in this mode.

Score rankings and achievements are tracked through Chillingo’s own Crystal game network. 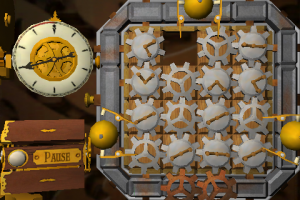 The game features a well-done touch system that takes the iPhone’s screen out of your way and puts you in simple control of these seemingly real objects. It’s a simple tap (or swipe) to move a tile — and you can move more than one at a time by tapping on the first tile in a row to move. Two fingers on the screen allows for drag-based rotation of the various puzzle objects. Although the original is a PC title, Cogs was definitely meant for a touchscreen.

Cogs is addicting, brilliant, and frustrating. A casual puzzler, it is not. Oh, the game takes it easy on you for the first few puzzles in order to instill within you a false sense of mechanical mastery. Shortly thereafter, however, the puzzles get downright cruel. You’ll discover that the next level, a mere flat board of pipe tiles, has pipe pieces on not one but both sides. Or try your hand at ringing an array of bells in perfect synchronicity with a wildly varying array of hammer cogs to deal with. It’s a case of “must…defeat…this…game…" where one might not always call achieving victory “fun," but rather “necessary — for sanity’s sake." It can be maddening, but in the loveliest sort of way.

I’ve spent significant time with various pre-release builds of Cogs over the last few weeks and I can say that it’s, at the moment, my favorite iPhone puzzler and one of my very favorite iPhone games in general. I really can’t imagine much in the way of a negative that a puzzle fan could posit against this game. But if my praise doesn’t convince, grab the free PC demo version and give it a try to get at least a feel for the game.

Cogs is being sold in an interesting way in that you pay as you go, buying incremental packs of ten levels for 99¢ a pop. For the initial 99¢ you get the first ten levels, which basically amounts to the puzzles that make up the Cogs tutorial. Beat that, and the next ten levels are 99¢, beat those and ten more are 99¢, and so on. If you buy the game and all four DLC packs, Cogs will run you $4.95 and should take around 10 hours to complete if you try to beat every challenge in the game.