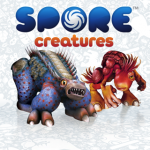 The Spore series started as a PC game by Will Wright and has since spawned several other games and a line of t-shirts, posters, and other swag. Plans for the future include expansion packs for the original Spore, a Spore card game, and even a Spore movie by the director of Ice Age. But where do the iPhone games fit in to all of this?

The first Spore game released on the App Store, Spore Origins [$1.99 / Free], arrived in early September of ’08. At the time, it was an amazing game compared to the other games available in the infancy of the App Store, especially with how few “name brand" game franchises there were available at the time. Sadly, the game has not aged well, and the enhancements made in the sequel, Spore Creatures [$6.99], don’t bring much to the table. 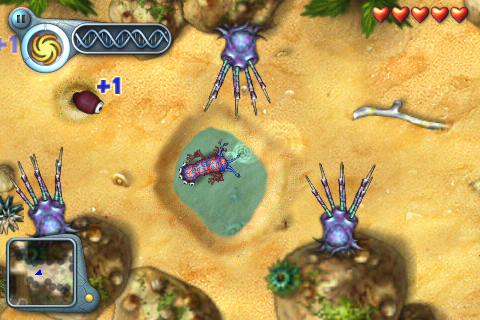 Much like the original, the goal in Spore Creatures is to eat everything lower on the food chain than you are to collect DNA which is then used to evolve, improving existing abilities and granting new ones to your creature. You control your creature (this time on land) by tilting, and the heart of the game mostly involves tilting your phone to steer your creature in to anything that moves. 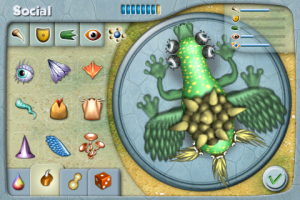 Spore Creatures attempts to add some much-needed depth to the game by adding different obstacles in the game world that require certain creature upgrades to overcome. For instance, one of the first things blocking your progress to the next area of the game is a rock which can only be moved once you’ve added legs to your creature, giving it the power to move the rock out of the way. Farther in to the game you will come across boss monsters, and other creatures that you can socialize with.

The one thing that is a lot of fun in Spore Creatures is the actual creature editor itself. With 45 unique body parts, body shape, and colors to be tweaked the iTunes description claims that there are billions of possible combinations. Making silly looking creatures is much more fun than tilting your phone to have them randomly bump in to things, and I really hope that EA brings something similar to the Spore Creature Creator to the iPhone some day.

Spore Origins was released at a time when a ton of people were completely engrossed in Spore mania. Now that the Spore franchise is getting stale, I doubt the sequel will have the same allure. Quite simply, there are both better tilting games and better adventure games on the App Store right now, and unless you’re in love with the crazy creatures of the Spore universe, there aren’t many reasons to spend much time with Spore Creatures.