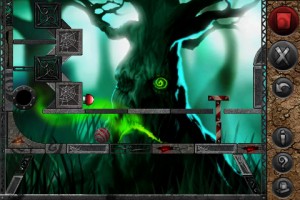 Isaac Newton’s Gravity [App Store] is Namco’s latest foray in to the casual puzzle aisle in the App Store. Originally released as Professor Heinz Wolff’s Gravity for the PC in late 2008 then a simultaneous Wii and DS release in early 2009, Professor Wolff (A real scientist who even had a brief appearance on the Ali G show and his own British television series.) was apparently given the boot for Sir Isaac Newton himself. Aside from this scientific swapperoo and half as many levels, very little seems to have changed aside from obvious interface modifications to adapt the game to the touchscreen.

The game involves solving physics puzzles by arranging blocks and other objects on each of the 50 levels to hit a switch. Pressing the play button on the top right of the screen causes a ball to shoot out and if you positioned everything right, hit the various objects you strategically arranged to fall over, knock in to each other, or otherwise cause some kind of chain reaction that involves something mashing the goal switch.

As it stands right now, Isaac Newton’s Gravity is a fairly basic physics game with better than average graphics and controls which can get a little finicky at times. The real magic is apparently coming in the 1.1 update. According to Jon Kromrey, the GM of the Apple games division over at Namco, the 1.1 update will be hitting the streets sometime in February or March which will allow players to share custom made levels they create online instead of the current implementation which only allows players to create custom levels then share them via Bluetooth.

In the meanwhile, if you enjoy these types of games, Gravity will keep you scratching your head for quite a while, especially if you have someone local to trade levels with.