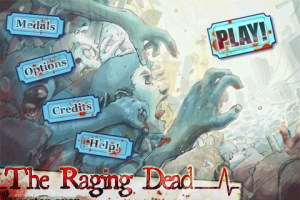 Zombie games come a dime a dozen on the App Store, but most take form as some sort of shooter, so it’s refreshing to see somebody trying something new in The Raging Dead, developed by GhostBird Software. Using either bombs or a machine gun players of this fresh zombie game are tasked with quickly eliminating a zombie threat in over 22 different areas of a metropolitan city from a bird’s eye view. With agressive zombie A.I. that will hunt down civilians and convert them to their undead army in only seconds, The Raging Dead will require a quick eye and an even faster finger to find success.

Each level in The Raging Dead consists of a single screen with hundreds of dots that represent people milling about. Blue dots are humans, and red dots are zombies. At the start of a level there will only be a few red dots (or more, depending on how far into the game you’ve made it) but that quickly changes as the evil little red dots begin quickly catching the little blue people, pausing only for a second or two to convert the former human into another red zombie dot, which will then join in with its attacker to catch even more humans. 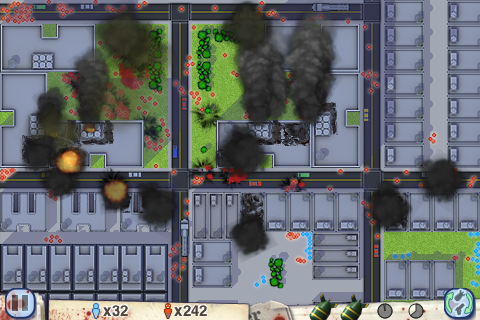 As you might imagine, entire cities can be completely overrun with zombies unless the undead are stopped quickly, and that’s where the player comes in. Tapping on the screen will drop a bomb (or fire the machine gun, if that’s your preference), killing all zombies in the impact area. That impact area is painfully small at first, and that combined with the extremely zoomed out view in each level makes precision a bit difficult. Luckily, weapons can be upgraded with money earned at the end of each level to allow for a more forgiving blast radius, so players will be able to eliminate the zombie threat quickly and efficiently. 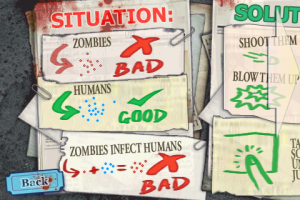 The interesting part of the game becomes apparent when you realize that your weapon has limitations like reload speed time, and you must sacrifice some civilians in order to prevent the infection from hitting everywhere in the city at once. The strategy is to quickly eliminate all the scattered zombies at the start of the level, and by the time you’ve done that it’s likely that the one or two that you missed have created a small army around their locations. That’s just the sacrifice that you’ll have to make if you want to be successful, because the only way to win is the eventually get all the zombies in a corner where they have no more civilian targets to infect and wipe them out all at once.

Bombs are great for killing many zombies at once, but you’ll run the risk of killing humans and damaging the city if you spam them. The machine gun can only kill one zombie at once but its very useful once you decide to start going for “A" rankings by avoiding avoiding city damage and keeping more civilians “unzombified."

There are four different rankings that can be awarded at the end of each completed level, and more money is distributed to the player for higher rankings. Levels can and will likely have to be replayed to farm money (especially towards the beginning of the game, where everything is just a tad too hard), but it’s likely that you won’t mind, as levels can be completed in only seconds if you’re good enough and you’ll want to improve your level rankings anyway.

GhostBird Software has stated in our forums that multiple profiles, more levels, more weapons, more behaviors, and different modes like challenge and survival will be added in the future.

The Raging Dead is an interesting game, especially if you remember the Zombie Infection Simulator java applets that made the rounds online quite a few years ago. The strategy the game forces you to use in choosing which humans to sacrifice to save the rest of the population from the zombie infection is a unique gameplay element that we enjoyed.