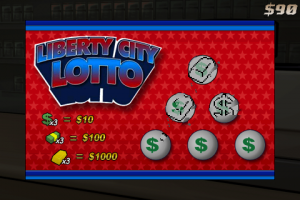 Grand Theft Auto: Chinatown Wars [App Store] was quietly released into the App Store this evening. Chinatown Wars for the iPhone seems to lie somewhere in between the DS and PSP versions in regards to graphical quality, but as far as pure GTA gameplay, everything so far seems intact. (Complete with an awful lot of swearing.)

Much like other versions of the game, screenshots barely do it justice. Liberty City in motion on the iPhone is amazing, and all the jagged edges in the screenshots quickly fade away when you’re racing down a street, under elevated train tracks, and through alleys as you escape the police. The realtime clock in-game also changes the lighting of the city, shifting from the orange glow of a sunset to the street lights turning on at night. It really looks awesome. 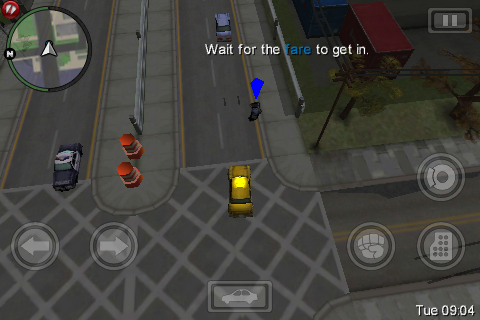 The basic premise of the game involves a man named Huang Lee, the son of a Triad gang boss who was recently sent to sleep with the fishes. He flies in to Liberty City with a heirloom sword his father won in a poker game, deciding to deliver it to his uncle. Of course things never go as planned, and not long after landing Huang finds himself in the middle of a gunfight and winds up getting kidnapped. After stealing the sword, the assailants assume Huang is dead, and looking to dispose of the body drive the car he’s in off the side of a pier. In the same vein of other GTA games, story isn’t really anything revolutionary, but it gets the job done.

Chinatown Wars is controlled very similar to Gameloft’s Gangstar, with virtual buttons and a joystick that handle all the driving, running, shooting, and other activities in game. The iPhone port of Chinatown Wars retains the stylus minigames that filled the DS version, appearing in a little popups where you do things like tap to smash the window of the car you were trapped in at the beginning of the game, slide your finger around to turn a screwdriver to start a car you’re stealing, etc. 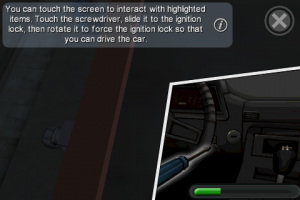 When the Nintendo DS version was first released, I devoted hours to playing through the game. So far the iPhone port seems like a faithful reproduction with quite a few expletives. I obviously don’t have the full text scripts of both games to compare, but everything I’ve come across so far has fit with what you would expect out of a GTA game, and it would appear that very little if anything was actually censored for the App Store release.

Chinatown Wars seems to be a complete GTA experience. You have your apartment that serves as your character’s hub with a “Fruit" computer you can check emails on, a garage you can stash a car in, and when you’re on the road there is a full GPS system with a map of Liberty City that you can plot your destination on to easily get from one side of the city to the other. There’s all kinds of stat tracking that will tell you everything from how many bullets you’ve fired to how many fish you’ve fed and in-game options that offer all kinds of different tweaks to the interface and gameplay.

We weren’t initially sure if this release was intentional, as we expected some amount of pre-release fanfare from Rockstar, but we are going to be working on a full review of this version of the game.