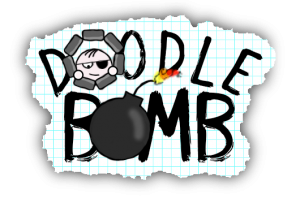 Bottle Rocket Apps is responsible for quite a few entries on the App Store, most notably, the National Public Radio app which has been well received by iPhone owning fans of NPR. Their most recently release is Doodle Bomb [App Store], a physics-based bomb puzzle game that is a lot of fun.

The goal of each of the 50 levels in Doodle Bomb is to assist your eyepatch-equipped “bomb master" in tossing bombs from what appears to be some kind of strange sewer pipe to flip various switches, resulting in a door being unlocked– Allowing you to progress to the next level. Bombs are thrown by tapping on screen in the direction you want to throw, tapping closer or farther away from the bomb master to control the strength of your throw. 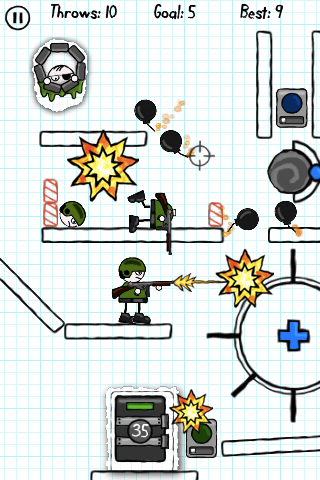 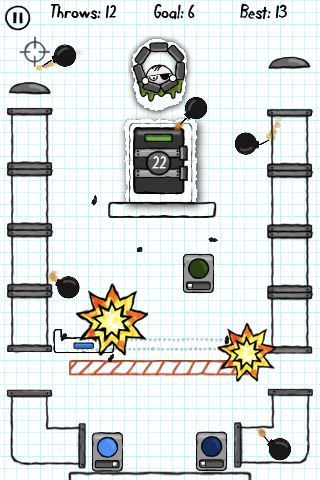 Throughout the game you will come across many different obstacles such as mice to bounce bombs off of, soldier to blow up with bombs, switches of different colors that control different gadgets and gizmos on the game board, pipes to throw bombs down, and many others.

Each level can be completed either by just tossing tons of bombs out and hoping something lands where you want it to, or by precisely throwing bombs and using the least amount possible. Every level also comes with a target number of bombs to use, and if you get under that, you will earn a “bomb badge" which then unlock additional goodies in game.

Doodle Bomb reminds me a lot of Ragdoll Blaster and other similar physics games on the App Store. I think it’s safe to say if you’re a fan of the physics puzzle genre, Doodle Bomb will be a welcome addition to your game collection. The Doodle Bomb thread on our forums also has quite a few people posting positive responses, along with the developer actively answering questions.