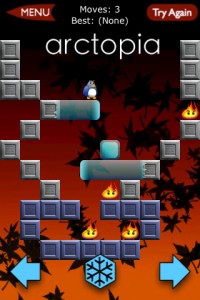 In the spirit of games like Lode Runner that use a limited number of ways to interact with an enironment to force players to think creatively, developer Alexander Williams brings us Arctopia [App Store], a puzzle game with a distinctive retro feel.

Arctopia provides players with three simple on-screen buttons: a “move left" button, a “move right" button, and an “ice" button. As the player, you control an unnamed penguin intent on ending the lives of as many angry-looking fireball critters as possible. There are 120 levels, each of which can be played in any order, regardless of how many levels have been completed. This is a method of game design that I really enjoy, as it allows players to skip levels that they think are too easy or too hard.

Each level is 2D with a side-view perspective, and puzzles are solved by knocking ice or iron blocks into the aforementioned fire critters. Pressing the “ice" button will create ice in the space below and to the right (or left, depending on which way you’re facing) of where your penguin in standing. If there is already ice in the targeted location, that ice will be destroyed, potentially causing a chain reaction in which other ice pieces fall and cause a ton of destruction. 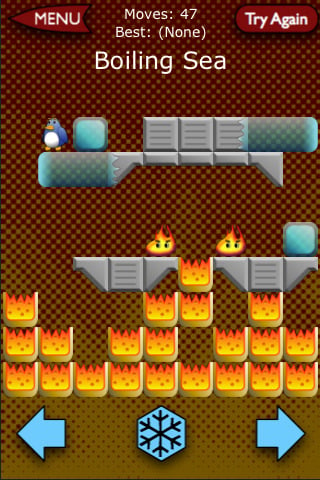 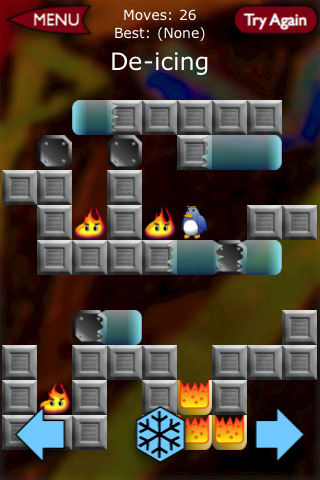 Despite the simple control scheme, there’s a lot of complexity in the game mechanics due to the different elements that must be considered when attempting to solve a level. The penguin can hop up on small steps, but any ledge more than two blocks high cannot be climbed. Other elements (each of which are rolled out over time as the game progresses) like flaming barrels or iron blocks can interact in seemingly unlimited ways to create seriously challenging puzzles in the later levels.

I think that the art style could’ve used a more creative direction, but the game has a very clean feel to it. The main menu manages to give players options for quick-starting on the last level they played, selecting any of the total 120 levels, fooling with sound settings, or checking out the tutorial, all while providing extra information like the total number of completed levels and some randomly selected fun facts about penguins. 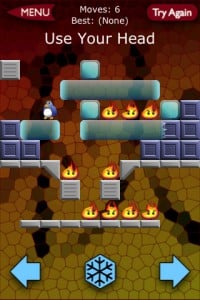 Arctopia keeps track of how many moves it takes players to complete its levels, and encourages players to try to beat them in less moves. Unfortunately, it doesn’t provide any information on what the lowest possible number of moves a level can be beaten in, so there’s no real baseline number for players’ comparison. If there’s anything that needs to be changed in an update, it’s this.

Arctopia is a fun little game that will appeal greatly to those with fond memories of similar ’80s classics. For most people, the game is a really enjoyable pick-up-and-play little app that will likely give those who download it something to do for a long time. Those who aren’t interested in slower-paced, thinking games should probably avoid this one, but if you’re like me and have an unexplainable love for Lode Runner, this game is worth a look.