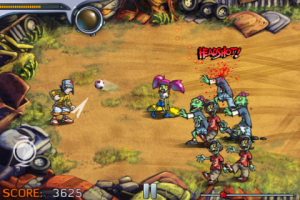 In late October of last year we first posted about Super Awesome Hyper Dimensional Team’s Pro Zombie Soccer, a game which seeks to merge the internationally popular game of soccer with the even more internationally popular pastime of killing zombies. We got our hands on the game this evening, and can safely say that Pro Zombie Soccer will likely quench the zombie slaughtering urges of all soccer fans.

In Pro Zombie Soccer, you play as Jax, a soccer fanatic who is now homeless following an embarrassing performance at the tryouts for the local super-team thanks to a wicked hang over. While digging through the trash one day he was bitten by the mysteriously zombified Julinho, the star player of the aforementioned team. Apparently transmitted through the bite, Jax inherits all of Julinho’s soccer prowess.

Also, being fully aware of how zombie bites work, Jax also realizes that he doesn’t have much time before he too is turned in to a zombie. So, he does the next logical thing and decides to grab the soccer ball out of Julinho’s bag and murder as many zombies as possible before then.

Pro Zombie Soccer has simple single-thumb controls. You drag your thumb up and down the left side of the screen to aim your kicks, and by holding down your thumb longer before releasing it you can power up your kick– A necessary technique to take out some of the stronger zombies in game.

As you slay zombies, a bar on the top left corner of the screen slowly fills up. Once full, you can tap an, on-screen button that illuminates to select one of three available power-ups: A lightning ball which seems to move much faster, a ball which cuts through multiple zombies instead of bouncing off them, and last but certainly not least, kicking your ball in to a satellite which fires a massive laser killing everything.

These power-ups can be seen in the following gameplay video:

Pro Zombie Soccer is still in development, but even this limited demo was a ton of fun. The animations are incredibly detailed, the game premise is ridiculous, and the gameplay itself is simple yet incredibly rewarding when you manage to unleash a massive satellite strike seconds before being overwhelmed by an entire screen full of zombies.

For more information on the game, check out the developer’s web site or the thread on our forums.