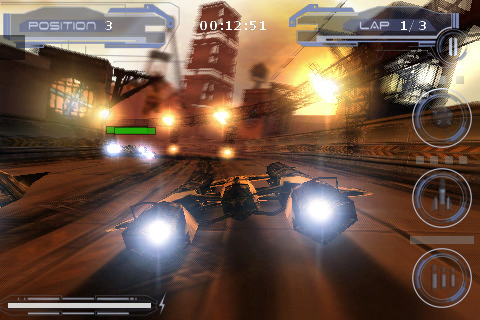 The App Store’s low-grav racing space certainly is starting to get crowded, which is just fine by me. And it looks like the latest release to join the ranks, Speed Forge Extreme [App Store] from Rat Square / Chillingo, may just be the best of the lot.

It’s 2142, and the colonization of Mars is underway. Vast settlements have been created to house miners seeking the valuable raw materials of the Red Planet. Crime is rampant, time is abundant and the citizens are looking for some entertainment …

The mining gig on 22nd-century Mars must be a rather fruitful one, considering how much raw materials would be needed to construct a large-scale racing arena made up of 12 futuristic racing tracks. But then, the miners, just like iPhone gamers, need their entertainment. And Speed Forge Extreme delivers. 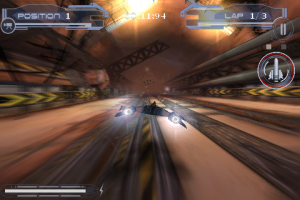 While Speed Forge largely follows the standard Wipeout-inspired racing formula, it does add in a bit of a twist. To start, most of the game’s 12 tracks deliver the typical low-grav racer experience. Choose from among six different craft (unlocked along the way) in a race against five computer-controlled opponents in a bid to cross the finish line first. Along the way, you can pick up power-ups such as weapons to knock out opponents, shields, and repair kits and make use of speed-pads (while avoiding slow-pads) to help get the job done. In addition to these traditional tracks, Speed Forge includes various arena levels where you and your opponents are placed in a large enclosed space smattered with power-ups, in an effort to destroy the most opponents as fast as possible to come out on top. It’s a nice variation on the formula that helps break up long race sessions. It’s a nice mix.

The game features five different control configurations utilizing different combinations of accelerometer, D-pad, and slider controls, some featuring auto-acceleration. I was able to enjoy the game playing with each method, but favor the tilt-controls. It shouldn’t be hard to find a configuration you’re happy with. Invert-Y and vibration effects are toggles. 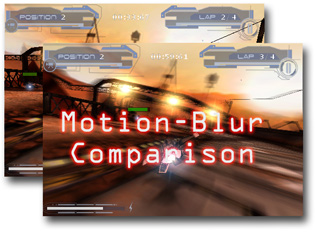 Speed Forge is quite impressive, visually. The interesting ship designs, track architecture, and dark Earth- Mars-tone palette lend a very nice atmosphere to the game. (The visuals and overall feel of the motion puts me in mind of UBI Soft’s late ’90s racer POD – Planet of Death.) But where the game’s graphics really shine are on the iPhone 3GS and 3G iPod touch, where the developers were able to take advantage of OpenGL ES 2.0 to deliver a full-screen motion-blur effect that makes for some of the best looking polygons ever seen on an iPhone screen. Unfortunately, such eye candy doesn’t come without a price; the framerate of the game running with motion-blur enabled on my iPhone 3GS feels lower than that of the game running (without motion-blur) on my 2G iPod touch. Happily, the developers allow users to disable the motion-blur effect as well as set its intensity on the latest devices — and Speed Forge running without the effect on my 3GS is as smooth as silk. All that said, the game still looks great on older devices — don’t get me wrong. But, for the record, I prefer playing with motion-blur on despite the framerate impact — it’s just too lovely to miss.

An optional ‘Overbright’ display toggle, available on devices old and new, delivers magnified lighting blooms that give the game a stronger HDR-lighting feel at little or no cost to the framerate.

Having spent considerable time with the v1.1 release (a recent update), I can confidently call Speed Forge Extreme my current favorite futuristic racer in the App Store. The camera angle, the well done tracks, the visual effects, the excellent sense of speed — they all come together to deliver what really does feel like a “console" title on the iPhone. I do wish that the developers had opted to add-in online leaderboards and, perhaps even, multiplayer support to really take things to the next level but, lacking these, it’s still a great single-player racing experience. I’d urge everyone to at least have a look at the free, lite version [App Store].