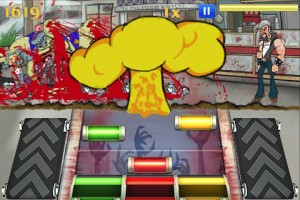 There may be rhythm games on the App Store already where you can pretend you’re singing, playing a guitar, rocking out on the drums, or even spinning turntables, but all those pale in comparison to beat matching to slay an endless supply of zombies. In Zombeat [App Store] you play as Zeke who according to the in-game character bio has given up a life as a biker to start a new career in zombie mass murder.

The game comes loaded with tunes from APM Music, and while it doesn’t include any tracks that I was able to recognize, with the optional 99¢ holiday song pack there are 22 total songs available. Gameplay consists of standard beat matching with blocks that must be tapped as they come flying down the screen. The unique twist in Zombeat is that with each beat you match, Zeke shoots a gun, swings a chainsaw, or uses one of many other attacks. 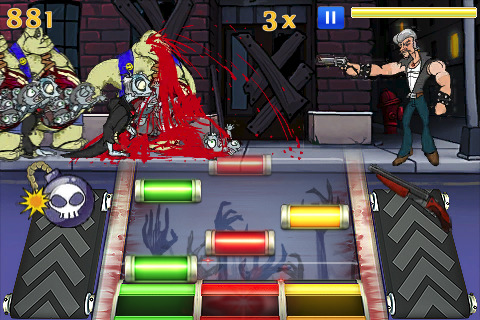 Depending on your performance, bombs that clear the whole screen when tapped and weapons that can be equipped appear on conveyor belts. The game is over when you miss enough beats for Zeke to get overwhelmed by zombies, but if you succeed in surviving through a song your score is uploaded to an online leaderboard.

Zombeat isn’t a particularly amazing game, it just does a good job in combining a rhythm game with zombies– Which likely will be more than enough for some people to slam their mouse down on the “Buy" button in iTunes. Watching the river of zombie blood as you do well in the first few songs you play is highly entertaining, but aside from that, Zombeat doesn’t really do anything that Tap Tap Revenge 3 [App Store] isn’t already doing for free.