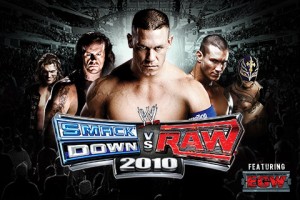 When I first heard about WWE SmackDown vs. Raw 2010‘s [App Store] release on the app store, I was admittedly unexcited. Other wrestling games on the platform have underwhelmed, to put things nicely, so I was justifiably skeptical. After spending extended amounts of time with the game, learning the ins-and-outs of the mechanics and exploring all of the various modes, however, I can say this: SvR 2010 may not be the first game to attempt to bring wrestling to the iPhone/iPod Touch, but it is without a doubt the best.

There are several ways to play SvR 2010. Exhibition allows you to select your preferred wrestler, opponent, arena, and difficulty setting, before entering a match, while Quick Match is a faster option that throws players right into the fray. There is a tutorial mode available from the Play menu at any time, and it features three tutorials that separately cover the basics of wrestling and more advanced techniques like picking up a chair and applying it to your strategy to aid in beating the snot out of a big ugly guys. This tutorial is also an optional feature when players first begin a file save in Career mode, the heart of SvR 2010‘s package. 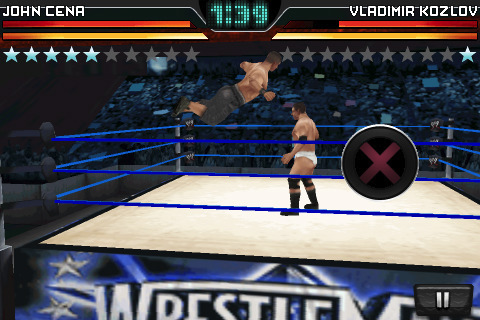 Career mode starts out by letting players create their own personalized wrestler, and then sets them along the path to WWE stardom. The career mode’s story is utterly ridiculous and implausible, but fans of the WWE are likely to have no problem with this sort of thing, as poor writing and over-the-top bravado have become the standard in the wrestling world. In a nutshell, the story involves your created wrestler being betrayed by a friend. Naturally, the only way to achieve vengeance is to beat up a series of goofy characters in a battle for the WWE championship.

You’ll unlock more shirts, pants, tattoos, and signature moves for your character as you progress through Career mode, and nearly everything about your character is customizable. I really embraced the ridiculous nature of the story, naming my superstar “ULTIMAHULK" and giving him green skin, so that he might draw energy from the sun to help strike down his enemies with the power of poorly staged piledrivers (that’s not in the game, that’s just part of my imagined fiction for my character). 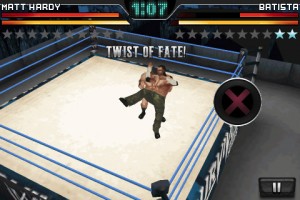 When not making progress through Career mode, there are six arenas (including arenas from Summerslam, the Survivor series, and Wrestlemania) and 11 stars from Raw, SmackDown, and ECW to fool around with via Exhibition mode. These 11 wrestlers (Batista, John Cena, Chris Jericho, Rey Mysterio, Randy Orton, Triple H, Undertaker, Big Show, Edge, Vladimir Kozlov, and Matt Hardy) can duke it out in 7 different modes of play: Regular, No Disqualification, WWE Extreme Rules, Iron Man, Submission, Ultimate Submission, and Last Man Standing.

What really makes SvR 2010 a great game in my eyes are the controls, which are well thought out for the device. Movement is controlled by swipes, and nearly every other action in the game is relegated to a situationally sensitive “smart button" located near the middle of the screen. After completing the three in-game tutorials and playing only a couple matches, I felt that I had a complete understanding of the controls, and was winning matches with consistency. It would be far too difficult to accurately detail the intricacies of the one-button controls, but I think that anyone who enjoys the console games or any sort of arcade fighting game will enjoy the simple genius of the control scheme.

Otherwise, I was pretty disappointed at the lack of any multiplayer features (not even local play is included), and the game’s audio is pretty low-budget. No one, not even the ring announcer, has a voice-actor, so it’s a stroll down “text-only" lane for this game. There also seems to be only one song in the game, a generic rock track that gets very old very fast. After seeing the clear signs of the extra effort that went into the intuitive controls and above-par visuals in the game, I’m just not happy with the game’s audio.

WWE SmackDown vs. Raw 2010 is enjoyable, and I say that as a person who isn’t blindy in love with such games. In fact, it’s been a pretty long time since I’ve really enjoyed a wrestling video game, so downloading this one was a refreshing experience and a great decision. I feel that SvR2010 could get traction amongst fans of the genre, so it’s worth a try if the thought of being able to smash Triple H in the face on the go appeals to you.