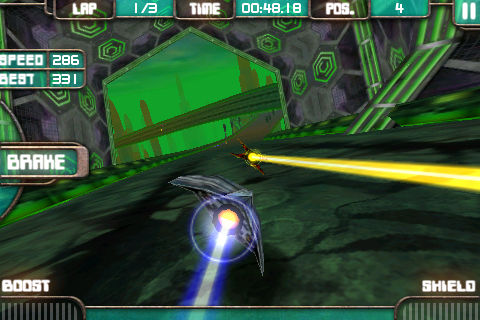 Just over a year ago I reviewed CobraMobile’s futuristic racing game Low Grav Racer [App Store]. Way back when, it was a visually impressive game and indeed the closest thing to Wipeout in the App Store. (And the degree to which any given low gravity, futuristic  racer approximates Wipeout, the king of futuristic racers, is really the critical metric in determining the game’s worth, so high did Psygnosis set the bar of that genre, as every gamer other than die-hard F-Zero devotees are aware.) Though an enjoyable game and, as I indicated, Wipeout-like, Low Grav Racer was, in fact, no Wipeout. Surely driven by the urge to close the gap, CobraMobile has just released Low Grav Racer 2 [App Store] for the iPhone and iPod touch. So how does it fare? 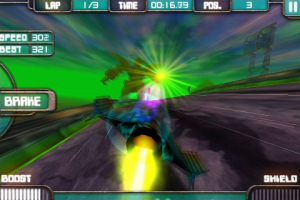 Low Grav Racer 2 puts you in control of any of six futuristic racing craft (three of which must be unlocked) in a race to the finish line across 18 different planet and space system-based tracks. There are two race modes: Single Play and Time Trial. The former is a competition to complete each track in first place against five AI competitors, while the latter is a solo challenge to get from start to finish in the least time possible. As in Wipeout, leading the pack involves more than just speed and savvy handling; it involves weaponry. Scattered about each track are power-ups that enable shields, mines, missiles of several types, speed boosts, and various other items of destruction that help to slow down the competition — and, likewise, help the competition put a little slow on you.

So far the description of LGR2 sounds a lot like that of the original Low Grav Racer. LGR2 does bring a number of enhancements that improve the overall gameplay as compared to the original. The most notable difference is the significantly enhanced draw distance. The original title used a heavy fog effect to mask pop-in, while LGR2 more fully renders distant track elements and the floating, futuristic items of scenery, lending a rather more realistic feel to the overall situation. As well, LGR2 delivers a more intense feel to the race thanks to apparently faster action and tighter track design. Both versions feature very smooth animation with a solid framerate, but there’s more going on in this latest release. As well, Plus+ network integration, tracking awards and leaderboards, adds to the game’s play incentive. 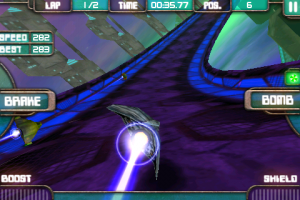 Like the original, LGR2 features solid accelerometer steering control with a tap to brake and fire weapons. Sadly, like the original, LGR2 lacks left and right airbrakes, an element of Wipeout that allows for superb ship control. I was disappointed to see this feature still not realized in the sequel release. Another criticism I might voice is the overly spacious feel of the tracks. While it is less of an issue in LGR2 as compared to the original, I prefer tighter tracks that demand real control excellence. That’s not to say that in this release you don’t spend plenty of time scraping along the edge of the tracks thanks to their various twists and turns or slamming into rock formations that protrude into some of the courses, but tighter tracks make for a more breakneck race session. Also, I would prefer that your ship take damage during said collisions, but that is not the case with either LGR release.

So, is Low Grav Racer 2 a match for Wipeout? Not quite. It gets us closer than the first release, certainly, and is a quality racer that’s both challenging and fun. Those who enjoyed the first outing will likely find LGR2 to be worth the price of admission, and those new to the series who like what they’re hearing should bypass the original and go straight for this sequel. As more a fan of futuristic racers than the rubber and asphalt variety, I consider Low Grav Racer 2 to be one of the stronger racing games in the App Store.