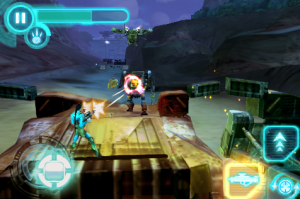 If you haven’t gone crazy with Avatar fever by now in the wake of what may very well be the most hyped movie in modern history, and are looking for a platforming adventure game set in the fantastic jungles of Pandora, an alien world inhabited by the blue skinned Na’vi, James Cameron’s Avatar [App Store] for the iPhone may just be what the doctor ordered.

The game itself merely takes place in the Avatar universe, and tells the tale of the events leading up to the movie as a sort of prequel to the film itself. Gameloft apparently had complete access to all of the assets behind the movie, as well as recording some original voicework by the cast for use within the game– Creating an experience that (to this skeptic of movie games) was quite shocking.

Avatar somehow manages to stand on its own, and instead of feeling like a game that was created for the sake of yet another marketing avenue for a movie, it feels like a game that just happens to take place in the same world as the movie. Controlled using a mixture of a virtual joystick and on-screen buttons, there are portions of the game that are reminiscent of traditional 3D platformer games like Mario 64 or Crash Bandicoot, with a combo-friendly combat system straight out of games like Hero of Sparta.

The following video shows some highlights of the first couple levels:

Later in the game you come across a Na’vi village, ride some crazy six legged horse, and there’s even a Panzer Dragoon-like flying level where you pilot a banshee which can be seen in this video (which regrettably doesn’t have very good sound) that was shot at the Gameloft event in Paris:

We will have a full review soon, but in the meantime first impressions and other comments are being collected from forum members in this thread.