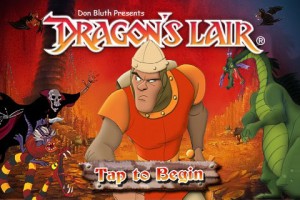 The classic laserdisc video game Dragon’s Lair has made its way to the App Store this evening. Originally released to the arcade in 1983, this full motion animated game was a massive departure from the other games of the era. According to Wikipedia, a Newsweek quote from August, 1983 captures the excitement of the game at the time:

Dragon’s Lair is this summer’s hottest new toy: the first arcade game in the United States with a movie-quality image to go along with the action… The game has been devouring kids’ coins at top speed since it appeared early in July. Said Robert Romano, 10, who waited all day in the crush at Castle Park without getting to play, “It’s the most awesome game I’ve ever seen in my life."

Former Disney animator Don Bluth created the animation for the game which was a series of laserdisc movie sequences with user controlled branch points that allowed the game to continue. The timing of the moves were critical to success and consisted of a choice of moving a joystick in 4 directions or pressing an action (swordplay) button. Of course, by today’s standards, the gameplay is simplistic and unforgiving. 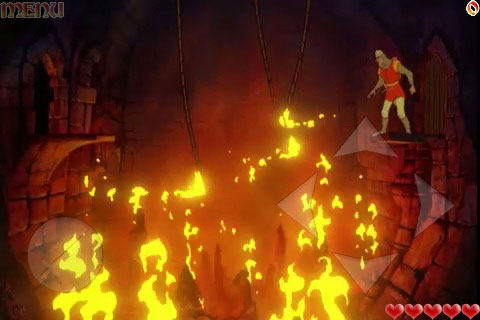 The iPhone version of the game offers the use of an on screen sword button as well as a virtual direction pad that can be sized in small, medium or large views. The player has an option of choosing 3, 5 or Infinite lives. Infinite is actually chosen by default which is presumably a concession by the iPhone developers for the unforgiving nature of the game. For a more realistic “arcade" experience, you’ll want to ratchet down the number of lives. 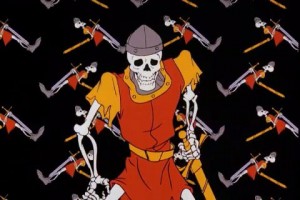 Dragon’s Lair for the iPhone also offers a live “Move Guide" which highlights which button to tap as you play. If that sounds absurdly easy (it’s not), but again it’s a reflection of just how difficult the original game was to play. You can (and should) turn off the Move Guide to see how the game was originally played.

In order to preserve the game’s original play, the developers have included an “Arcade" mode as well as a “Home" mode. The Arcade mode is described as a perfect translation of the way the 1983 arcade machine played. They even warn you that it might not be the way you remember the game, but it is how it was. In this mode, if you fail a sequence, you are not allowed to play it again immediately. Instead, you move onto the next sequence. The Home mode plays more one might expect where you must pass a scene in order to proceed. The Home mode also includes extra movie sequences that were never shown in the arcade version.

The embedded video shows both both Home and Arcade modes as well as Move Guide On and Off. Not being a Dragon’s Lair expert, I failed horribly playing the game with the Move Guide off, and not much better with the Guide on.

The game is well implemented and should be a treat for anyone who remembers the original version. If you ever waited patiently in line for a chance to play the arcade game as Robert Romano (now age 36) did back in the day, this is clearly a “must have" for nostalgia value. At $4.99, it represents the equivalent of 10 plays of the original $.50 arcade game. If you’re too young to remember this game, however, it’s not one you should buy for the gameplay, but primarily for it’s historical significance.