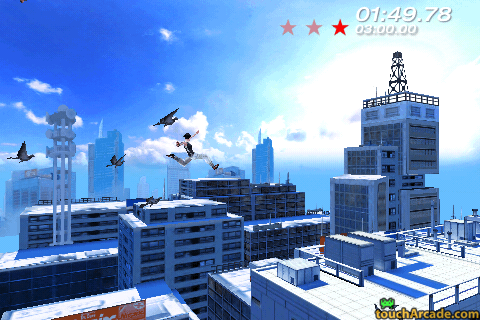 EA revealed this morning that they will be bringing their action adventure game Mirror’s Edge to the iPhone. The original Mirror’s Edge was a first person action game that on the PC and home consoles featured an amazing amount of fluidity in the chains of acrobatics required to traverse the various buildings of the city the game takes place in.

Here’s the trailer for the original PC version in case you missed it:

In Mirror’s Edge, you play as Faith, a member of a secret group known as “Runners" who act as couriers for information that cannot be transmitted in other means due to the totalitarian regime that has taken over and implemented a policy of extremely intrusive surveillance across the game-world.

We don’t have a whole lot about iPhone version of the game, but the original had an excellent sense of speed and immersion as you jump, climb, grab, and vault over things jumping from rooftop to rooftop. As seen in the new iPhone screenshots, the view has obviously shifted from first to third person on the iPhone, so it should be interesting to see how much of what made the PC and home console version of the game great translates to the App Store. 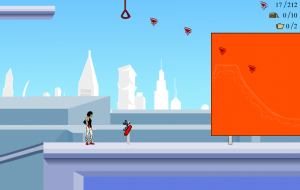 It should be noted that the game has already been successfully translated into a 2D side scrolling Flash game hosted at MirrorsEdge2d.com — so this is not completely uncharted territory. The iPhone version does appear much more advanced than the Flash version with 3D graphics and “dynamic camera angles" as seen in the screenshots embedded below.

Here’s the developer blurbs about the game which is said to be coming in January 2010: