UK-based Hidden Games has recently released a side-scrolling 2.5D point-to-point transport game with the feel of a cave-flier.  Cabby [App Store] is a lot of fun. 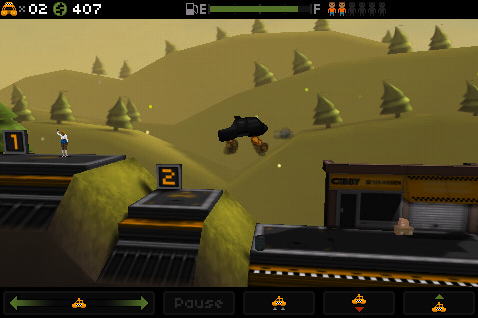 The goal of the game is simple: drive (pilot?) your taxi cab from place to place, picking up passengers and packages, dropping them off where they need to go. What makes things interesting is the fact that you’re not negotiating city streets but the far more challenging environments of air, water, and space across 15 different levels. The various levels are made up of twisty cave-like routes, floating taxi platforms, moving obstacles, and even mines. Your cab is equipped with vertical and forward thrusters, and each type of atmosphere responds quite differently to them. The bit of vertical thrust that lifts you off the ground in an air environment might send you through the roof in a space environment. It’s nicely frustrating to work with these rather different sets of physics while trying not to crash into a cab platform or a mine. 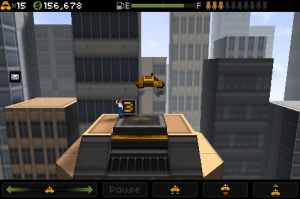 Each level has a set number of customers that must be ferried to their desired destinations before the level is complete. Along the way it’s important to keep an eye on your fuel level. A quick stop to the gas station is sometimes necessary, though it will cost you some of the funds accumulated as you work the level. Happily, some of these funds can also be used to purchase new lives when you’ve wrecked one-too-many cabs.

Cabby offers two playmodes to choose from: Career mode and Arcade mode. The former takes you from level to level, earning as much money as possible and unlocking new cabs and levels as you go, while the latter allows for a quick game in any unlocked cab or level. The game features a left / right touch slider for direction control, with onscreen buttons for thrust and descent. And while the developer tells me that he’s tried various control arrangements and that the current controls work well for most in playtesting, I find the touch points to be a bit small for my fairly large hands, which occasionally gets me into trouble in the game. Your mileage may vary, and the developer promises to look further into the control system as he receives feedback from users.

See the developer’s Cabby trailer video for a closer look.

Despite my issue with the controls, I find that Cabby‘s obstacle-filled routes, varying and well-done physics, and money / fuel metering delivers a highly enjoyable and challenging game experience that is well-matched to the type of pick-up, 4-minute game sessions that best suit mobile gamers. But, if you’re not convinced, give the free, lite version a try [App Store].