Pocketball is a fresh new puzzler that takes physics and navigation and wraps them together in a tight little package. In each of Pocketball’s 30 stages, you’ll need to stretch pieces of rope across different pegs to guide a falling ball to a like colored bin. If there’s a blue ball it goes to the blue bin. If there’s a green ball it goes to a green bin. You get the idea.

Things get complicated fairly quickly. Some stages offer up 2 or 3 different colored balls that you need to guide to their like-colored bins. Other stages have items scattered around the playfield with boosters that will give your balls a toss in a certain direction or nukes that will incinerate any ball they come in contact with. With a good deal of variety and some exceptional level design, no two stages ever feel the same. 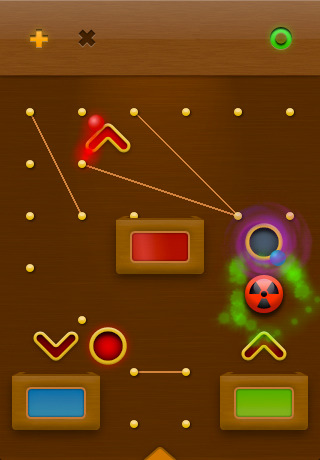 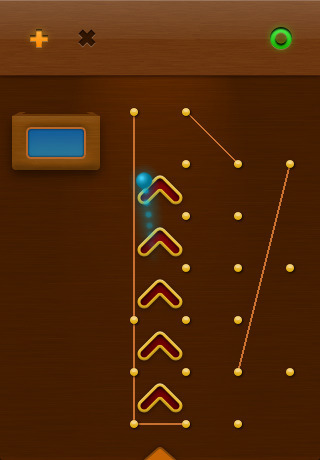 The mechanics behind the game may be simple, but that doesn’t mean the puzzles don’t offer up an incredible level of challenge. You may find yourself returning to the same puzzle a dozen or more times before finding a solution. There’s a certain degree of logic involved, but after awhile we just found ourselves testing the waters to see where different balls might land after setting up different ropes. Unless a puzzle has an obvious solution, there’s a real “trial and error” vibe to the gameplay. Thankfully Pocketball is incredibly forgiving of the “let’s see what this does” guess work that’s required. With no real penalties in the game, you can try each level over and over until you get it just right.

Pocketball is also forgiving in that it won’t force you to complete a level to proceed to the next. If you’re stuck on a level or two, you can walk away, check out some more levels, and unlock the rest of the game without ever going back to a certain over-complicated nightmare. Likewise you can always go back at a later time and see if you can finally best the harsh mistress that is stage 13.

Pocketball offers up a tremendous level of challenge in an “easy to learn but impossible to master" puzzler. Despite a few nitpicky complaints (such as lack of music), this game did the puzzle fanatic in our hearts good. If you’re a fan of genuinely challenging puzzle games that are about more than falling blocks, Pocketball is $1.99 well spent.