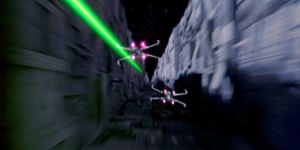 Those waiting for a more proper Star Wars themed game may be in luck with this upcoming Star Wars: Trench Run for the iPhone. THQ Wireless gave us a heads up on this preview video which shows a game built around a famous scene from the original Star Wars movie.

Use the Force to overthrow the evil Galactic Empire as they attempt to destroy the small Rebel base on Yavins jungle moon.

As part of the Rebel Alliances Red Squadron you dogfight with TIE Fighters above the Death Stars surface before heading into a trench where you are inundated by cannon fire. Dodge obstacles, and stay out of Darth Vaders sights as he tries to gun you down before you have the chance to fire your proton torpedoes into a thermal exhaust port the size of a womp rat. If successful, a direct hit will cause a chain reaction that destroys the Death Star, thus saving the Rebel base from impending doom.

Remember, only a precise hit will start a chain reaction. That’s impossible you say? Even for a computer? Bah…. I used to bullseye womp rats with my T-16 back home…