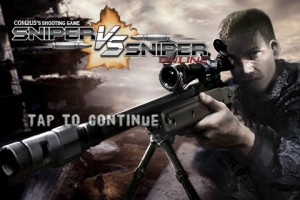 We first got a look at Sniper Vs Sniper: Online [App Store] back at PAX, and it was clear then that the game had as much potential as their previous online multiplayer title, Homerun Battle 3D [App Store] once it went live and the online community started to grow.

The most succinct way to describe Sniper Vs Sniper is Where’s Waldo? with guns. The gameplay involves scanning various buildings with binoculars to scout out enemy snipers, quickly switching to your rifle, and taking them down before they take you down. It’s a fast paced hybrid between a sniper shooter and a hidden object game, playable online against other players. 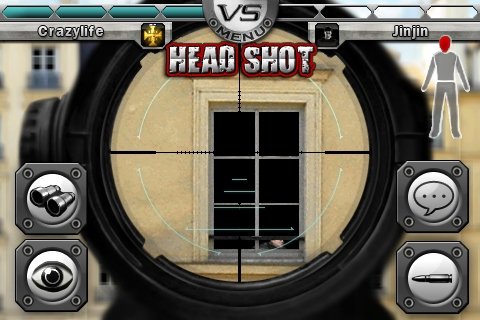 The online component consists of two game modes, 1 on 1 sniper battles and cooperative levels. When playing against another player, you will both be randomly positioned in opposing buildings at the start of each round. As quickly as possible you tilt your phone to move your viewpoint around to find the person you’re playing against, who will likely also be looking around with their binoculars. While you’re doing this, you will be able to choose from a series of ridiculous taunts which all play different quotes like “What would you like on your tombstone?"

Once you find your opponent, you need to take your rifle out and shoot them, but there’s more to it than that. Both of you have life bars, and the match is over when you run out of life. Like most video games, head shots do more damage so accuracy is key when it comes to actually firing your rifle. Once you damage your opponent, a new round starts and you both get new positions in the buildings. 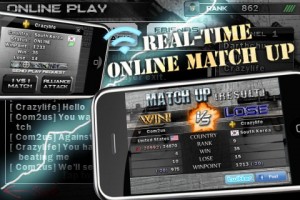 The catch is, if you shot your opponent in the previous round, they get a hint showing where you are in your building. Winning online matches usually requires being fast enough at scanning the other building to be able to find the other sniper before they (much more easily) find you.

If competing against other players in the 1 on 1 mode isn’t your cup of tea, the cooperative mode will pit you and another player against a building loaded with snipers. Whoever shoots more of these AI controlled snipers wins the round. This is also how the single player mode of the game is played, although given how full featured the online component is, single player feels significantly less entertaining in comparison.

Just like Homerun Battle 3D, online play is ranked on global leaderboards and you have a list of friends that you can challenge. There’s even a lobby you can chat in between games. Com2Us also deserves some kind of merit badge for being one of the only game developers that includes a toggle in the game’s options to disable the intro movie.

Sniper Vs Sniper is such a strange combination of gameplay elements that put together just work. It’s part hidden object, part shooter, with a rich online component that is rivaled by few other games on the App Store. If the community takes off like it has with Homerun Battle 3D, I could see myself getting far too involved in competing online in Sniper Vs Sniper.