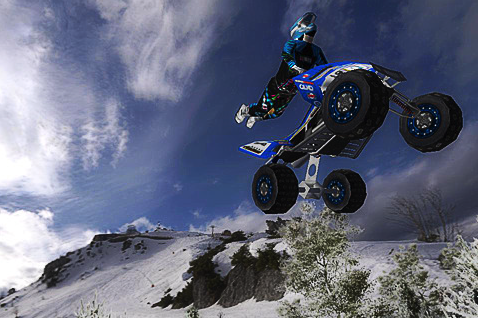 This week, 2XL Games‘ highly anticipated off-road racing game 2XL ATV Offroad [link] hit the App Store.  The game is a follow-up to the studio’s 2XL Supercross, a technically impressive dirt-track racing title that, physics and visuals aside, felt a little shallow from an overall gameplay perspective.  We’re happy to report that this latest from 2XL Games takes all of the “good" from Supercross and combines it with highly varied tracks, a proper career mode, and Wi-Fi multiplayer to deliver one of the very best racers in the App Store.

ATV Offroad features three different track types in which to compete.  Supercross tracks, much like those featured in 2XL Supercross are represented but, in addition, an array of Nationals (outdoor tracks) and Freestyle (it’s like stunt racing in a massive fossile pit) tracks have been added to the mix.  Whatever track type you’re racing in, the visuals are breathtaking — especially in the two outdoor types.  From the impressive draw distance to the overall smoothness of the onscreen action to the clouds of dust kicked up by your competitors, the game is an iPhone eye-candy carnival that the PSP has reason to envy.  The visual experience takes me back to the ATV Offroad Fury series on the PS2, but with a better sense of speed.  Yes, this truly is one of the most visually impressive games available for the iPhone.  It is absolutely a full console experience. 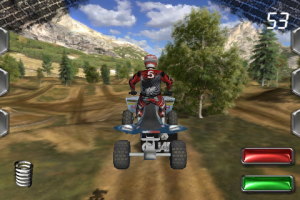 The game features an Arcade mode, which allows racing among any of the 16 available tracks across Supercross, Nationals, and Freestyle, as well as a Career mode (which is really the core playmode) and a Wi-Fi multiplayer mode (with Bluetooth on the way).  Online leaderboards provide a skill incentive.

Career mode involves moving through a sequence of 11 Leagues which are events of varied track combinations.  Rank high enough and the next League is unlocked.  I’ve spent a great deal of time playing rather deep into the title and can tell you that, at Medium difficulty anyway, it’s not a cakewalk.  The challenge is apparent and requires some real skill to League up.  But the journey to victory is a most satisfying one.  The requisite track replays to get the needed ranking are nothing but enjoyable.  Adding to the experience is an extensive achievement system that rewards players for skill on the track along the way.

The two available Freestyle tracks, in whichever mode you encounter them, are solo free-for-all’s in a large, terraced pit.  The goal here is to perform as many tricks as possible to rack up points and medal up from bronze to gold.  It’s kind of a Tony Hawk experience on an ATV.  The draw-distance and physics system exhibited here are impressive. 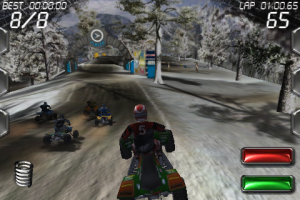 The game’s default control mode is accelerometer tilt, but a virtual stick is available as well.  I find the former to be far superior to the latter in any mode of gameplay.  Tilt control in this title has been very well tuned and offers excellent vehicle control.

In any playmode you can choose from among 15 different drivers and 15 different ATVs to get the race done.  The variation that these choices provide are simply visual rather than physical, but it’s nice to have choices.  And adding to the experience is an impressive sound system that does a great job of letting you know just where the encroaching competitors are on the track behind you.

I am a particular fan of offroad racing games.  I enjoy the heightened in-game physics that they exhibit and don’t at all mind a little travel on the Z-axis (jump, jump, jump).  That said, this is my favorite racing game available for the iPhone.  And the replay value is significant.  Anyone who enjoys a solid, well-rounded racer — and offroad racing in particular — would be a fool to let 2XL Offroad Racing pass them by.