Jonathan Lanis has recently contributed a simple and fun bit of 3D obstacle-dodging tunnel madness to the App Store in the form of Boost 3D [link]. 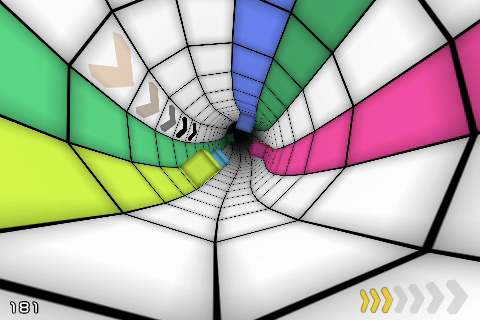 Boost 3D is about tunnels, and it’s a rather simple affair.  You start out racing down the inside of an obstacle-laden tunnel and, before you know it, you’re racing down the outside of an obstacle-laden tunnel, tilting left and right, trying to keep from careening into varying arrangements of colorful blocks.  There are boost pads that lend speed to your travel, as well as granting the ability to crash through an obstacle.  Granted, it sounds pretty same-old, same-old — I mean, there’re plenty of hurtle-down-a-tunnel games in the App Store — but somehow, Boost 3D stands above the pack.  It has a certain stylized, simple charm that makes it feel unique.  Not to mention the glass-smooth framerate.

That said, it could be more of a game.  You start down the tunnel, racking up points the further you go.  The track and obstacles change along the way, but it’s a one-shot run.  I think the addition of end goals and levelling would add significantly to the game.  But, still, among the iPhone tunnel games, Boost 3D is king, or close to the same.  It’s genuinely hard to put down.

See the developer’s gameplay video, which is silent, unlike the game.