World of Goo is a physics based puzzle game where you must use the various goos to build a structure to reach the end point of the level, represented by a pipe that sucks the unused goos off of your tower and in to a reservoir to calculate your score. The several types of goos in game all have unique properties, and the completion of each level hinges on exploiting each goo’s abilities. 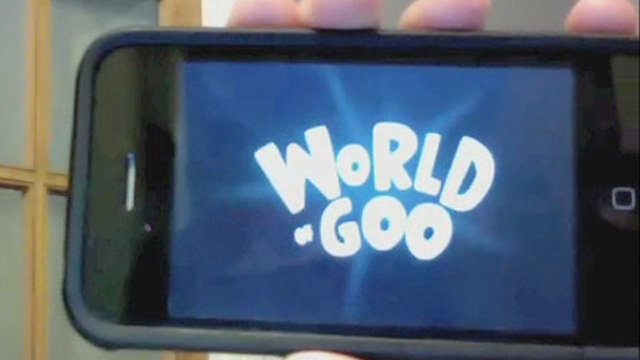 World of Goo exists on the Mac and PC (there’s even a Linux version) and you can buy the game on WiiWare. To celebrate the anniversary of the game’s launch, developers 2D Boy announced on their blog that World of Goo is coming to the iPhone:

We have it running well on the iPhone 3GS, and with a little luck we hope to get it running smoothly on the 3G as well. Hopefully more news on this soon.

Here is the trailer for the Wii version of the game:

It’s unclear right now whether this is a straight port of the original, an entirely new game, or a little of both. Either way, World of Goo is one of the best computer games I’ve played recently, and I highly recommend giving the demo a try. The developer’s web site features a free downloadable demo, but news of the iPhone port seems to have brought their web server to its knees. If you can’t access it, the demo is also available on Steam.

Update: If you want to skip the demo entirely, you can buy the full version of the computer game until the 19th for whatever you want to pay for it. If you can get the 2Dboy site to load, you can buy World of Goo for its normal price of $20, or $0.01. Whatever you feel the game is worth.