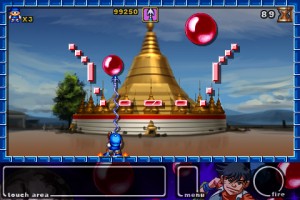 Pang (or Buster Bros.) was a popular 1989 arcade game that was subsequently ported to a number of home computer platforms. The basic gameplay has already spawned a number of App Store clones including Chippy [$1.99], Buster Boy [$0.99], LaserBug [$1.99], Bubble Pang Free [Free].

Player X, however, has brought an official Pang port to the iPhone with Pang Mobile [$2.99]. The gameplay is rather simple by today’s standards, and also pretty unforgiving. The game involves popping balloons bouncing on the screen with one of several possible weapons. The standard weapon is a harpoon that fires upward. If a balloon contacts the harpoon, it splits into smaller pieces. This repeats until your eliminate all the bouncing balloons. Smaller balloons, however, bounce at lower heights, making them harder to hit. Power-ups allow for a double shot, machine gun, and shield, while in-level obstacles can help or hurt your chances.

For long time fans, the mobile version seems to deliver on the Pang experience. Pang Mobile offers two modes: World Tour and Infinite Challenge. The game is controlled using a “touch area" that allows you to slide back and forth to move left/right. This avoids the imprecision of virtual buttons. Options include adjustments for difficulty and control sensitivity.

Video shows the game in World Tour and Infinite modes:

The game offers a local high score board only and only single player mode.

Not being a Pang player back in the day, it’s hard to speak as to how accurate a port this is, but early adopters seem to be enjoying it. Any fans of classic arcade action may also want to consider it.