I’ve been slowly playing through Dr. Fun Fun’s Hi, How Are You [App Store] since it came out nearly two weeks ago now, completely unaware of the phenomenon that is Daniel Johnston. I originally intended on writing about this game because I hadn’t seen another cell shaded platformer on the App Store. However, after doing some research on the history of Hi, How Are You‘s development, I got turned on to the world of Daniel Johnston and quickly became aware that this is Johnston’s life of art and music distilled into a iPhone game.

The premise of Hi, How Are You follows the theme of most of Johnston’s music in that you’re battling the forces of Satan to find love. Playing as Jeremiah the Innocent, you will make your way through over 25 levels to remove the curse of Satan. As the game progresses, you slowly change from a frog, to a block, to a ball, and finally back to human form. 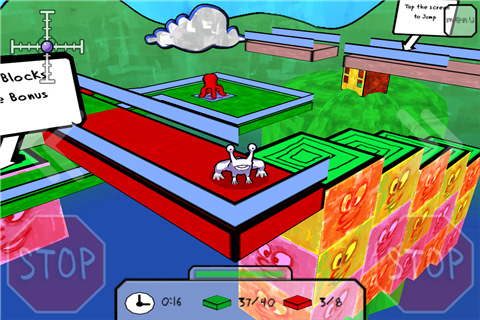 Your movement in the game is controlled using the accelerometer and the two stop signs in both lower corners of the screen instantly stops your character from moving. Initially this seemed like such an odd set of buttons to have cluttering the screen, but it didn’t take long for this seemingly strange control element to really grow on me as you never need to worry about finding the exact center of where you calibrated the accelerometer to in order to stay in place.

Instead, you hold the stop button, tilt the direction you want to move, let go, and you’re off. This control method allows you to navigate the different obstacles in game with ease. The camera can be panned right of left by pressing either side of the screen, and to zoom out you press both sides at once. 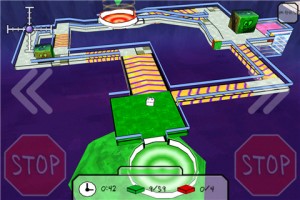 Completing the levels in game involves hopping over every tile, turning them green, then finding the exit. It’s not that easy though, as you quickly come across all kinds of obstacles, moving platforms, and other puzzles. The bottom of the screen displays your life, along with the time, the number of tiles left to turn green, and the number of bonus tiles on the level to be turned red. While each level is timed, you can keep playing and complete each level even if you run out of time, you just won’t be awarded for beating the clock.

Hi, How Are You has a soundtrack featuring several of Daniel Johnston’s songs, and an art style matching Johnston’s drawings. The difficulty ramps up nicely, and with each achievement you unlock a unique piece of artwork to view. I had fun playing the game, but after doing some reading on the life of Daniel Johnston, Hi, How Are You has taken on a whole new layer of awesome. Dr. Fun Fun not only created a game with a neat style that’s fun to play for people who have never heard of Johnston, but also an amazing piece of fan service for those who have.

If you’d like to know more about the world of Daniel Johnston, he has his own Wikipedia article, and his life is detailed in the 2005 documentary, The Devil and Daniel Johnston which is available on iTunes along with all of his music and several music videos.

Hi, How Are You is a fun platform puzzle game with a unique art style. If you’re not a fan of Daniel Johnston, playing through this game might just make you become one.