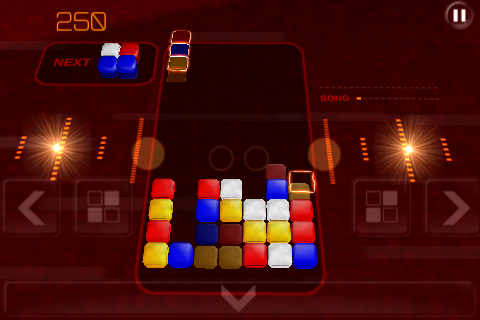 Empty Clip Studios‘ rhythm puzzle game Groovin’ Blocks, which debuted a year ago as a WiiWare download title and has recently seen retail release on the Wii, will soon be available for download in the App Store.  The iPhone version is a conversion of the larger, Wii retail release.

Groovin’ Blocks, which GameSpot calls “a music-based game like no other" (in reference to the Wii release), is, at it’s core, a match-three puzzle game.  Now, there’s no shortage of match-three puzzlers in the App Store — there are too many to count, really — but what sets Groovin’ Blocks apart is its musical / rhythm component. 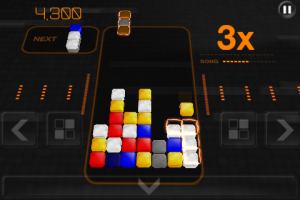 Each level — and there are over 50 in all — is played to a pumping techno soundtrack with scrolling beat-indicators on either side of the screen.  Block clusters slide onto the playfield in a Tetris-like fashion, and will ultimately come to rest at the bottom of the screen.  A tap on the ‘drop’ button will quickly drop the piece into place — but if you “hit a beat" (tapping the drop button during a beat of the soundtrack) the blocks will be bigger, brighter, and worth more points.  Hitting consecutive beats without a miss increases your score multiplier — but miss a beat and it drops back to zero.  Hitting the occasional Superbeat, shown brighter in the scrolling beat display, will double your current score multiplier.

Certain blocks contain power-ups that can be collected only if you hit a beat when placing said block.  Power-ups are unleashed when the successfully placed block is destroyed by a match-three scenario.

Empty Clip Studios was kind enough to give us an exclusive preview of the upcoming iPhone title.  We’ve spent some time with it and find it to be one of the most enjoyable match-three puzzlers in the App Store.  And there’s really more to playing the game than screenshots reveal.  iPhone gamers who enjoy a solid puzzle and/or rhythm game should keep an eye on this one.

Have a look at our very brief gameplay video showing action early-on in the game.

Groovin’ Blocks for the iPhone should arrive in the App Store very shortly.