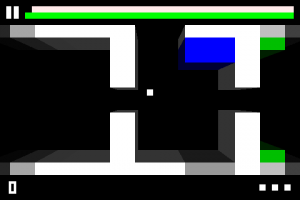 Dromsynt’s Squareball is one of those games that seems to demonstrate what a wide range of reactions a single gameplay mechanic can generate.

Squareball offers a touch-screen spin on the retro gameplay of breakout. The ball in Squareball constantly bounces up and down and your job is to navigate it to the end while knocking out certain blocks and avoiding others. You’ll also need to avoid gaps in the wall that will send your ball flying out to oblivion.

Instead of controlling the ball’s movement, you are actually sliding the level around the ball by swiping your finger on the iPhone’s screen. The game runs very smoothly and adopts a simple “retro" look for its graphics. Here’s the game in action:

It certainly isn’t an easy game and is, in fact, quite frustrating. But is it fun? Well, we played the game shortly after its release, and we didn’t love it. While we liked some aspects of the game, we simply didn’t feel compelled to keep on playing, and therefore couldn’t recommend it.

While that might have been the last of it, some rave reviews (higher ranked than Spider: The Secret of Bryce Manor at IGN) and interviews drawing parallels to Super Mario Brothers, make it clear that a certain group of you are going to go gaga over this game. Meanwhile, others had an even more negative reaction than we did with iLounge saying the game is “worth asking for your money back if you make the mistake to actually buy it."

Now, the recent release of a Lite version gives you the chance to decide into which camp you belong.