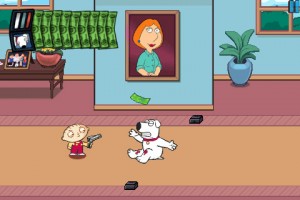 Glu’s Family Guy: Uncensored finally appeared for download last night. Family Guy: Uncensored is a series of minigames loosely tied to the television show. You will play as Brian running from Stewie, Quagmire swinging through a jungle, Chris shooting down flying Meg-pigs in a sidescrolling shooter, Stewie fighting Bertram in a MegaMan-like game, and of course the battle with Peter versus the chicken.

The problem is, none of these minigames are particularly fun once the initial novelty wears off which only takes a few moments. On top of that, some are easy to fail, and when you do the entire level must be reloaded. If you’re doing poorly, you will spend more time waiting for the game to load to try again than you will actually playing the game itself. Robo Stewie is probably the best game of the bunch as a sidescrolling platformer, but even it can’t really stand alone in terms of gameplay.

Overall Family Guy: Uncensored has a feel to it that is very similar to the movie or TV show based games of the 8 and 16 bit era. The game doesn’t at all utilize the Family Guy elements in a particularly amusing way, and instead leans heavily on catch phrases and attempts at humor to prop up a decidedly mediocre set of mini games. Amusingly enough, for a game branded as “Uncensored", Family Guy is only rated 12+ on iTunes. 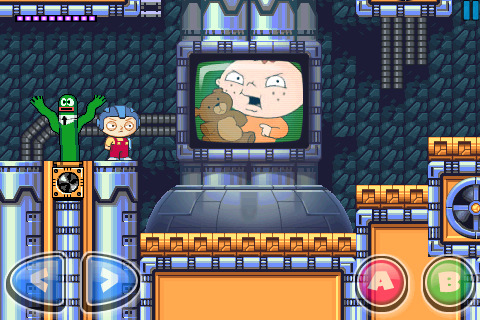 If you do happen to like any of the mini games, you can play higher levels of difficulty once you’ve unlocked them, and 3 additional mini-games are promised in a free update. At this point, we believe only the most die-hard Family Guy fan will likely derive enough entertainment from this game to warrant its purchase.