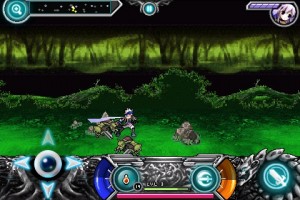 Zenonia fans will be excited to hear that Gamevil’s latest game Hybrid: Eternal Whisper [$5.99] has arrived in the App Store.

Hybrid is a hybrid of action, adventure and RPG genres. It is an action fighting game at its core but with an extensive skills upgrade system, RPG elements and is tied together with an in depth story line. You play the role of Grey a young kid with a mysterious history who is looking to defend his land and avenge his brother. The story walks you through your training which teaches you how to fight. The D-Pad offers movement and an action button for attacks. Grey also has two different sword grips: standard and reverse. The two grips are more effective for different scenarios and can be combined together to form longer attacks.

Additional special attacks and skills are introduced over time and there appear to be a massive number of possibilities. The game is a series of fights strung together with a story. Surviving the fight is, of course, the ultimate goal, but you also get graded on your style and performance with each fight. As you level up and pick up items from enemies, you can upgrade your personal stats and equip stronger weapons and defensive items.

The game features 70 battles, 10 hidden stages, and an endless mode. Some of the skills and attacks are demoed in this video:

We do plan on offering a full review of the game, but, in the meanwhile, the early forum impressions are being collected in this thread.