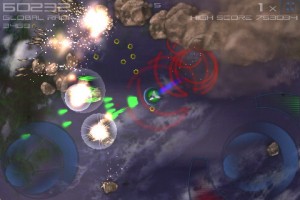 I’m not sure what it is about dual-stick shooters, but these games seem to generate huge followings on the iPhone platform. It may just be that the multi-touch screen suits the control system so well. Regardless, the latest dual stick shooter to make a big splash in the App Store is Alley Labs’ Meteor Blitz [$1.99].

Meteor Blitz is a dual-stick asteroid shooter that offers both Arcade and Survival modes. The game centers around your ship which can fire a variety of different weapons. The standard projectile weapons include a plasma gun, flamethrower, and ice cannon. Different weapons are better for use against specific obstacles. Ice meteors respond best to the flamethrower, while the fire meteors succumb easiest to the ice cannon. Other weapons at your disposal include screen-clearing bombs as well as the gravity gun which can be used to slingshot meteors into enemies causing massive damange. See this video showing the gravity gun in action.

As you destroy enemies and asteroids, coins are collected for weapons and ship upgrades. Meanwhile, in game bonuses give you extra lives, bombs, shields, enemy slow down or the ability to attract coins. 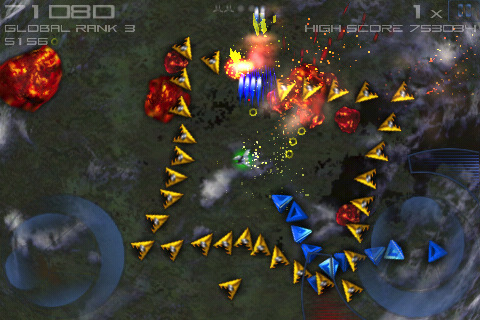 Aside from the onslaught of meteors, enemy ships constantly descend into the game field requiring near constant movement to avoid death.

The game’s control system is the typical dual analog stick control system with spot on sensitivities. Weapon switching and bomb triggering are done with nearby buttons at the top right and bottom left corners of your right controller, while speed boost is triggered by tapping your left controller. There is no way to flip the control system left/right. See this video:

As you can see, the art and animation are top notch with all the flourishes you’d expect. The developers also seem to have paid a lot of attention to some other details in the game that are worth pointing out. Pulling your fingers off the dual pads will automatically pause the game. The game also features practically no load times. This YouTube video shows initial launch and the near instant resume on relaunch. And finally, your global rank is given to you in real time as you play (video).

Overall, Meteor Blitz is one of the highest quality space shooters we’ve seen for the iPhone. It delivers 6 unlockable worlds with a good variety of enemies, excellent controls, and a lot of fun. At only $1.99, this one comes highly recommended.