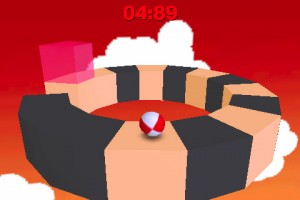 Pirogue Studio’s Dinky Ball [$1.99] is fast-paced ball rolling game that managed to suck me in.

While the game is set in a 3D environment, you simply control the ball’s forward and backward motion on a circular platform by tilting your iPhone. Tapping on the screen causes you to jump, and the goal is to get your ball to the red box which completes the level. Each level comes with a time limit and you want to complete each level as quickly as you can. The game starts off easy enough, but special types of surfaces soon appear that impact your ball’s behavior. Black blocks slow your ball down, while white speed it up. Later levels have disappearing blocks, jumping blocks, and more.

The game comes with 60 levels total but each level is a rather short timed run. Depending on your past experiences with ball rolling games, this is more a feature rather than a flaw. The game’s simple controls and short level designs offered quick challenges that kept me interested in the next level, reducing some of the frustration found in other ball rollers. The downside, of course, is that levels can be run through very quickly. I made it through 24 before things got very challenging.

See the game in action:

Overall, the game is nicely put together, but does seem to have some basic flaws. There are 4 save slots that allow you to play the game through starting at Level 1. There’s no way to go back and play a particular level, however. While you get timed per level, there appears to be no way to access these times. It’s possible that the entire 60 level run time is summed together, but I’m currently stuck on level 45.