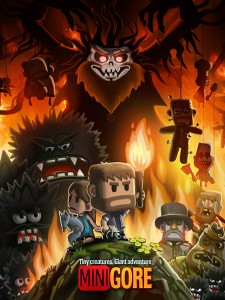 “The minis development process has been designed to open the door to a broad range of developers to encourage new talent and creative ideas to PSP. minis are being developed by some of the most creative studios from across the globe from GameShasta, a medium-sized development team based in India, to HoneySlug a three-man team in Camden, London. Some developers, such as Creat, have already created content for PlayStation Network; others, such as Subatomic Studios. are bringing their experience in the mobile phone market to PSP."

iPhone gamers will be familiar with some of the launch titles. Amongst them: Fieldrunners, Hero of Sparta, and Minigore.

Fieldrunners was the first iPhone game to announce a transition over to the PSP, but it appears Sony is continuing to poach some other indie titles from the iPhone market to fill out their new “mini" game strategy. It gives successful iPhone developers another potential avenue for their products.