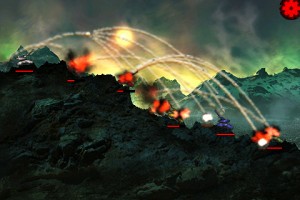 Dot Matrix Interactive Design’s KIL.A.TON is a first-rate artillery game with a well-implemented twist — simultaneous battles. This means more intense battles where enemy tanks shoot when you shoot ratcheting up the game in terms of strategy and intensity. And if that doesn’t interest you, the amount of in-game content and online multiplayer play may.

“Last tank standing”…that’s the mantra in KIL.A.TON as you battle a team of tanks through a variety of terrains. Aside from the simultaneous combat, the game incorporates a variety of elements including time constraints, equipment upgrades, and an AI that plays tough. The creative scoring system awards points for revenge and taking down the leader while deducting points for destroying yourself. 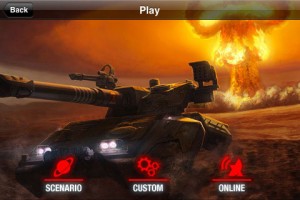 The game has three modes of play: Scenario, Custom and Online. Scenario mode has 4 different campaigns as well as a Free for All mode. Each campaign scenario consists of several rounds where points are awarded for tanks destroyed with final point total determining the overall winner. Custom allows you to set up the number of rounds, shot clock, difficulty and number of players to create your own scenarios. Finally, online mode allows you to try your skills against worldwide opponents over Wi-Fi, 3G or EDGE.

The ‘Free for All’ campaign provides 4 survival scenarios — Frantic, Nuke-o-Rama, Close Combat, and Redirection. These occur in unique environmental situations with a limited set of weapons. For example, in Nuke-o-Rama, each tank is provided with unlimited nuclear warheads which tend to destroy everything within the blast zone. Each of the Nuke-o-Rama rounds begins and ends pretty quickly but you’ll have fun nuking each other. These survival scenarios are really some of the best the game has to offer.

KIL.A.TON doesn’t disappoint when it comes to weaponry and defense. By default, each tank has a unlimited amount of standard shells and the ability to hover. But you can also go shopping for the latest in war gear with 17 weapons and defensive tools to choose from. The equipment store is intuitively organized and tapping each weapon brings up a brief description. And, weapons can also be sold back at a discount, of course. 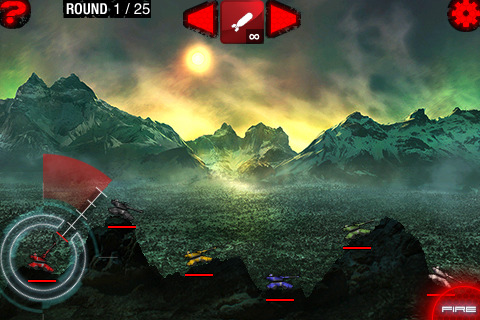 The weapons gauge is located at top of the screen and can be used to select the weapon or defensive system to use. The aiming mechanism in KIL.A.TON is easy to use: a circular guide appears around your tank that can be rotated by touch to aim. A gauge in the guide indicates the power behind the launch which is set by holding down the Fire button located in the bottom right of the screen. Releasing the fire button will launch the weapon or activate defensive systems.

If your tank happens to be destroyed with other tanks still remaining, you get to watch the rest of the scenario play out. The problem is the lack of a fast forward button to speed up the game in this situation. It’s interesting to watch the first few times, but can be monotonous after a while.

What makes KIL.A.TON a standout is the added strategy involved. Bonus points are awarded for taking out the leader, and that becomes very apparent when your tank is the leader. The other tanks will come after you with fervor, and revenge points are awarded if you manage to blow up the tank that destroys you. As the game increases in difficulty, additional enemy tanks as well as the proverbial shot clock become factors. In some rounds, you literally have only a few seconds to plan and get a shot off.

All in all, KIL.A.TON is a solid artillery game with an easy-to-use targeting mechanism that novices and advanced players should take to pretty quickly. The level of content and the organization of the different game modes including online multiplayer (once there are enough players) are very entertaining and should provide long term replay value.