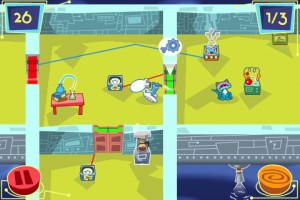 Timeloop is a surprisingly fresh puzzler with a unique twist presented with a fun art style that will keep you playing and wishing for more levels.

Now, the underlying story in Timeloop is a little out there — after creating a time machine, the scientists have somehow become trapped in a time loop where they are in constant danger of running out of oxygen. Their only hope is Nik, the janitor robot who must open doors to reach the vocal scientists and the occasional meowing cat. To open doors, Nik must repair circuit boxes that open the doors.

Of course, the game is more complex than just repairing circuits. In some cases, doors and levels require two or more robots working together to navigate. That’s where you come in because part of your job is to activate the timeloop that sends Nik back in time. Because you’re traveling back in time, a version of Nik, let’s call him Original Nik, is already there represented as a ghost. So, there will be two or more of you in the same scene. (I won’t bother to go into the theoretical repercussions related to meeting yourself back in time.) 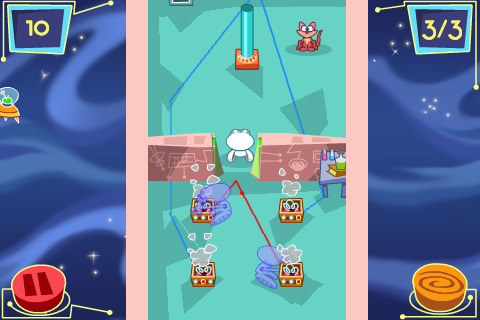 At the heart of Timeloop is a game about strategically planning ahead. Depending on how you move Original Nik and what he interacts with, he will repeat those same steps when you go back in time. Literally, it’s a replay of everything Nik performed before the timeloop.

The game has 32 levels and you have the opportunity to earn gold, silver and bronze medals based on how quickly Nik rescues the scientists. The hitch in all this is that the oxygen level is constantly depleting so you’ll need to move quickly. The levels begin relatively easy, but they become more elaborate in terms of doors and tools. Some doors require tools such as a blowtorch to repair or later on, securing and applying a computer code to a cell phone. With the simpler puzzles, only one timeloop is required, but more timeloops become available later as the puzzles increase in difficulty.

The graphics look great with cartoon-like animations along with some quirky sound effects. Visually, Timeloop has a creative art style that should be very eye-catching to most. Moving Nik is straightforward: tap in the desired location where you’d like Nik to go. The controls are more or less responsive, but on a few occasions, Nik wouldn’t respond right away or he would end up kissing the wall or worse.

The game is both fun and frustrating at the same time. The rooms become more complex so in many cases, it’s a matter of trial and error in terms of what works and what doesn’t. You almost certainly won’t be able to solve latter puzzles on the first try or even after several trys. One way to look at it is that each level requires you to solve it several times. With the clock ticking, being able to move quickly and efficiently before the timeloop is activated will determine whether or not you succeed.

Overall, Timeloop is a great puzzler with a unique twist. The visuals are fun and lighthearted, and the concept is innovative. Outside of the occasional quirks with the controls, Timeloop is a must for those who enjoy logic games…or time travel. A Lite version is also available that gives you a good taste of the game with a sampling of the first 5 levels.