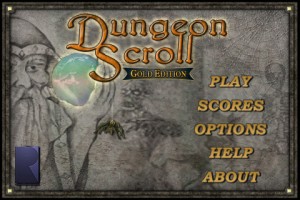 One of my favorite things about the App Store is the sheer amount of games that are based on a concept that is so far out there that you would sound like some kind of maniac pitching the idea to someone else. Dungeon Scroll [App Store] joins the ranks of really weird game ideas that just work, and work well, on the iPhone.

Created by Seth A. Robinson, an award winning game designer also responsible for the classic BBS game Legend of the Red Dragon, Dungeon Scroll is a role playing word game that resembles what I imagine the bastard video game son of Underworlds [App Store] and Textropolis [App Store] to be like.

In Dungeon Scroll, you fight the various monsters you come across in your dungeon crawl by forming words, or “casting spells", as the game puts it. Each dungeon has a set of foes you must vanquish to move on to the next, and each monster has their own set of hit points. Larger words do more damage, but you can only use each word once per dungeon. Because of this, there’s a significant amount of strategy in the words you play in each fight. If the monster you’re fighting only has a few hit points left, you want to use three letter words to finish them off, saving your bigger words for more powerful creatures. 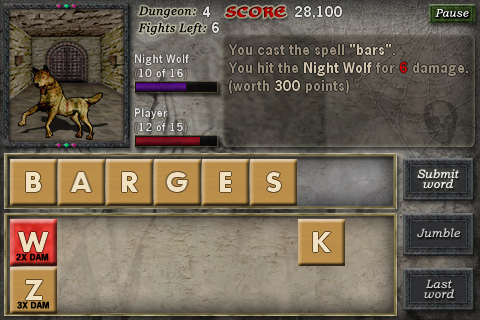 When you slay a monster, they drop treasure in the form of various bonus tiles. The most common type of treasure tile is an additional single-use letter, but there are also tiles which add damage to words, multiplies the damage of words, or in the case of the oracle tile, show you the best word you can form with your current tile set. According to the game’s help screen, these special tiles are twice as likely to appear when you aren’t holding on to any, so it’s in your best interest to use them to get more.

Each monster you fight comes with its own time limit, cleverly disguised as your hit points bar which gets refilled after every fight. Find enough words to kill a monster before it kills you or it’s game over. There’s even more to the game though, certain enemy types like turtles are heavily armored and only four (or more) letter words will hurt them and there apparently are some super difficult dragons that appear later in the game with tons of hit points. Also, as you make your way through dungeons you will find books which will give you a choice of a statistic to increase, such as +5 to your health bar or +1 damage to each word.

Wrap all this up with a global leaderboard (that I’m currently #9 on, although not for long I’m sure), and you’ve got a game which is way more fun than I was expecting it to be when I first downloaded it. If you like word games, Dungeon Scroll is one that you really need to add to your collection. The RPG elements create a really unique experience, and the individual monster battles will have you finding words and strategizing when to play them instead of just playing absolutely everything you find like most word games.

There isn’t a lite version available, but there is a free demo of the Windows version of the game available on the Robinson Technologies web site. It’s also worth mentioning the PC version of this game sells for $6.95, so the iPhone port at 99¢ is being sold at a substantial discount from the original.