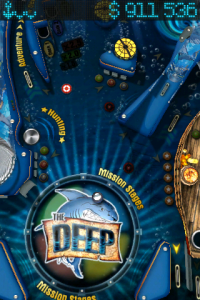 Complete with a sunken ship to bounce around on, a treasure chest to open, and sharks to hunt, the pinball table in The Deep is a significant evolution from the comparatively barren table in Wild West Pinball. Both games have online global scoring, but The Deep is anything like Wild West, the top score boards will be flooded with super-human pinball scoring monsters before too long.

Here’s a gameplay video I took of me completing a few objectives and exploring the various areas of the pinball table:

Wild West Pinball was my favorite pinball game for the iPhone until The Deep came along. As someone who often emptied entire pockets full of quarters in to pinball machines in my life, it’s great to be able to get a game like this for what would amount to four plays of any real machine. If you have any interest in pinball, The Deep is a steal at $0.99.